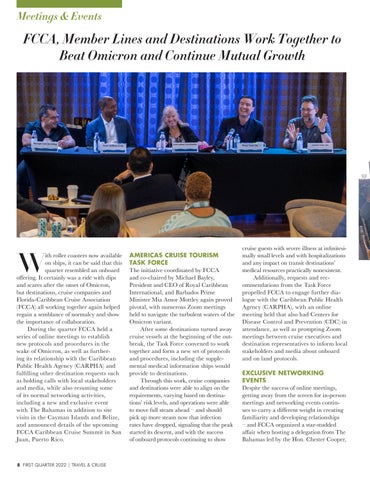 ith roller coasters now available on ships, it can be said that this quarter resembled an onboard offering. It certainly was a ride with dips and scares after the onset of Omicron, but destinations, cruise companies and Florida-Caribbean Cruise Association (FCCA) all working together again helped regain a semblance of normalcy and show the importance of collaboration. During the quarter FCCA held a series of online meetings to establish new protocols and procedures in the wake of Omicron, as well as furthering its relationship with the Caribbean Public Health Agency (CARPHA) and fulfilling other destination requests such as holding calls with local stakeholders and media, while also resuming some of its normal networking activities, including a new and exclusive event with The Bahamas in addition to site visits in the Cayman Islands and Belize, and announced details of the upcoming FCCA Caribbean Cruise Summit in San Juan, Puerto Rico.

AMERICAS CRUISE TOURISM TASK FORCE The initiative coordinated by FCCA and co-chaired by Michael Bayley, President and CEO of Royal Caribbean International, and Barbados Prime Minister Mia Amor Mottley again proved pivotal, with numerous Zoom meetings held to navigate the turbulent waters of the Omicron variant. After some destinations turned away cruise vessels at the beginning of the outbreak, the Task Force convened to work together and form a new set of protocols and procedures, including the supplemental medical information ships would provide to destinations. Through this work, cruise companies and destinations were able to align on the requirements, varying based on destinations’ risk levels, and operations were able to move full steam ahead – and should pick up more steam now that infection rates have dropped, signaling that the peak started its descent, and with the success of onboard protocols continuing to show

cruise guests with severe illness at infinitesimally small levels and with hospitalizations and any impact on transit destinations’ medical resources practically nonexistent. Additionally, requests and recommendations from the Task Force propelled FCCA to engage further dialogue with the Caribbean Public Health Agency (CARPHA), with an online meeting held that also had Centers for Disease Control and Prevention (CDC) in attendance, as well as prompting Zoom meetings between cruise executives and destination representatives to inform local stakeholders and media about onboard and on land protocols. EXCLUSIVE NETWORKING EVENTS Despite the success of online meetings, getting away from the screen for in-person meetings and networking events continues to carry a different weight in creating familiarity and developing relationships – and FCCA organized a star-studded affair when hosting a delegation from The Bahamas led by the Hon. Chester Cooper,