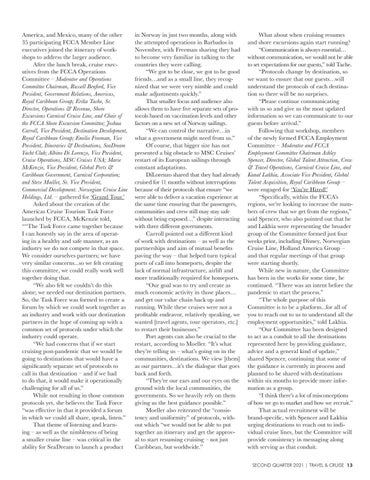 America, and Mexico, many of the other 35 participating FCCA Member Line executives joined the itinerary of workshops to address the larger audience. After the lunch break, cruise executives from the FCCA Operations Committee – Moderator and Operations Committee Chairman, Russell Benford, Vice President, Government Relations, Americas, Royal Caribbean Group; Erika Tache, Sr. Director, Operations & Revenue, Shore Excursions Carnival Cruise Line, and Chair of the FCCA Shore Excursion Committee; Joshua Carroll, Vice President, Destination Development, Royal Caribbean Group; Emilio Freeman, Vice President, Itineraries & Destinations, SeaDream Yacht Club; Albino Di Lorenzo, Vice President, Cruise Operations, MSC Cruises USA; Marie McKenzie, Vice President, Global Ports & Caribbean Government, Carnival Corporation; and Steve Moeller, Sr. Vice President, Commercial Development. Norwegian Cruise Line Holdings, Ltd. – gathered for ‘Grand Tour.’ Asked about the creation of the Americas Cruise Tourism Task Force launched by FCCA, McKenzie told, ““The Task Force came together because I can honestly say in the area of operating in a healthy and safe manner, as an industry we do not compete in that space. We consider ourselves partners; we have very similar concerns...so we felt creating this committee, we could really work well together doing that. “We also felt we couldn’t do this alone; we needed our destination partners. So, the Task Force was formed to create a forum by which we could work together as an industry and work with our destination partners in the hope of coming up with a common set of protocols under which the industry could operate. “We had concerns that if we start cruising post-pandemic that we would be going to destinations that would have a significantly separate set of protocols to call in that destination – and if we had to do that, it would make it operationally challenging for all of us.” While not resulting in those common protocols yet, she believes the Task Force “was effective in that it provided a forum in which we could all share, speak, listen.” That theme of listening and learning – as well as the nimbleness of being a smaller cruise line – was critical in the ability for SeaDream to launch a product

in Norway in just two months, along with the attempted operations in Barbados in November, with Freeman sharing they had to become very familiar in talking to the countries they were calling. “We got to be close, we got to be good friends…and as a small line, they recognized that we were very nimble and could make adjustments quickly.” That smaller focus and audience also allows them to have five separate sets of protocols based on vaccination levels and other factors on a new set of Norway sailings. “We can control the narrative…in what a government might need from us.” Of course, that bigger size has not presented a big obstacle to MSC Cruises’ restart of its European sailings through constant adaptations. DiLorenzo shared that they had already cruised for 11 months without interruptions because of their protocols that ensure “we were able to deliver a vacation experience at the same time ensuring that the passengers, communities and crew still may stay safe without being exposed…” despite interacting with three different governments. Carroll pointed out a different kind of work with destinations – as well as the partnerships and aim of mutual benefits paving the way – that helped turn typical ports of call into homeports, despite the lack of normal infrastructure, airlift and more traditionally required for homeports. “Our goal was to try and create as much economic activity in those places… and get our value chain back up and running. While these cruises were not a profitable endeavor, relatively speaking, we wanted [travel agents, tour operators, etc.] to restart their businesses.” Port agents can also be crucial to the restart, according to Moeller. “It’s what they’re telling us – what’s going on in the communities, destinations. We view [them] as our partners…it’s the dialogue that goes back and forth. “They’re our ears and our eyes on the ground with the local communities, the governments. So we heavily rely on them giving us the best guidance possible.” Moeller also reiterated the “consistency and uniformity” of protocols, without which “we would not be able to put together an itinerary and get the approval to start resuming cruising – not just Caribbean, but worldwide.”

What about when cruising resumes and shore excursions again start running? “Communication is always essential… without communication, we would not be able to set expectations for our guests,” told Tache. “Protocols change by destination, so we want to ensure that our guests…will understand the protocols of each destination so there will be no surprises. “Please continue communicating with us so and give us the most updated information so we can communicate to our guests before arrival.” Following that workshop, members of the newly formed FCCA Employment Committee – Moderator and FCCA Employment Committee Chairman Ashley Spencer, Director, Global Talent Attraction, Crew & Travel Operations, Carnival Cruise Line, and Kunal Lakhia, Associate Vice President, Global Talent Acquisition, Royal Caribbean Group – were engaged for ‘You’re Hired!’ “Specifically, within the FCCA’s regions, we’re looking to increase the numbers of crew that we get from the regions,” said Spencer, who also pointed out that he and Lakhia were representing the broader group of the Committee formed just four weeks prior, including Disney, Norwegian Cruise Line, Holland America Group – and that regular meetings of that group were starting shortly. While new in nature, the Committee has been in the works for some time, he continued. “There was an intent before the pandemic to start the process.” “The whole purpose of this Committee is to be a platform...for all of you to reach out to us to understand all the employment opportunities,” told Lakhia. “Our Committee has been designed to act as a conduit to all the destinations represented here by providing guidance, advice and a general kind of update,” shared Spencer, continuing that some of the guidance is currently in process and planned to be shared with destinations within six months to provide more information as a group. “I think there’s a lot of misconceptions of how we go to market and how we recruit.” That actual recruitment will be brand-specific, with Spencer and Lakhia urging destinations to reach out to individual cruise lines, but the Committee will provide consistency in messaging along with serving as that conduit. SECOND QUARTER 2021 | TRAVEL & CRUISE 13