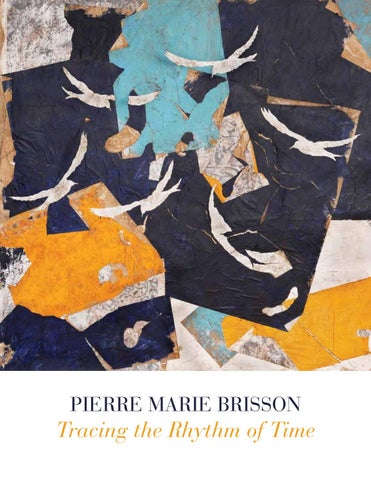 Tracing the Rhythm of Time

Tracing the Rhythm of Time

hite seagulls float across the densely textured, pale aquamarine picture plane of Pierre Marie Brisson’s painting L’envol mediterranéen (2017). The birds turn toward one another in mid-air as if locked in a dance; a perfect image of gliding movements frozen in time. Upon closer inspection, smudged white patches muddle the aquamarine. They add a melancholic sensation, as when clouds disturb a perfect summer sky. A dry, brittle, and raw sense further emanates from the surface. The birds are flat; no pictorial illusion is possible. The painting exudes the sensation that a scorching summer sun has burned all the humidity from the air and released a glowing light that hurts the eyes. In the blinding light, the birds appear simultaneously real, illusionary, and like a distant memory. The ‘brut’ sensation of the surface grows as the white shapes of the birds cede to darker brown patches, either scratched into the white paint or breaking through where the white paint peels off. The dark underside of a wing folds impossibly upward and the viewer can observe the dark geometric shape caused by a fold in the paper. This fold ruptures the pictorial illusion and emphasizes the bird’s material paper body. Is it the bird’s anatomy or the lightness of the paper that makes it fly? Contemplating the answer, the viewer gradually locates other peels and folds through which pale purple wallpaper emerges. As the paper folds back again, it reveals a second layer in gold. These folds perform no illusion; on the contrary, they turn the viewer’s attention to the paper’s surface. Like the peeling paint, each layer produces a new fading and reemergence of the surface, an invoking of material ephemerality, a new trace of time. Brisson’s recent paintings blend painterly marks and collage techniques. His distinct multilayered surfaces and ensembles of repeated organic and mythical motifs car-

ry on from previous works, now congealing in a pictorial language in full bloom. Brisson’s motifs have the quality of primordial signs. While the paper evokes ancient surfaces and styles related to writing, such as papyrus and hieroglyphs, the ochre and sand tones of the paper give the sense of a drawing scratched on the surface of a primordial cave. With every repetition, the viewer becomes more certain that these figures constitute not pictorial representations but rather the archaic and ancient images found in French caves: human, flower, bird, and fish. The images he produces evoke both material traces on the canvas and images from the collective human memory. Brisson was born in 1955 in Orléans, France, and knew from the age of fourteen that he wanted to become an artist. Foregoing formal training, he worked instead with artists such as Bernard Saby, Bram van Velde, and James Coignard, essentially learning his craft as an apprentice. Brisson’s birth coincided with the height of French postwar painting and tendencies such as Art Informel and Tachisme, and he came of age artistically in the 1980s, when painting as a medium enjoyed a worldwide resurgence. With this return of painting came a return of the figure

and the long-unfashionable aspects of content, narrative, and myth once decried by Modernist critics favoring abstraction. The sheer visual delight of Brisson’s forms and colors, often used in opposition, tie him to the expressive tendencies of the 1980s. Like many artists, Brisson captures sensations that lurk beyond the contours of the sensible world, and both his surfaces and his individual motifs stage gateways to further investigations of myth and history. In his works, such myths are caught between the knowledge of the past and the sensation of the present. The dense ground of Brisson’s canvases peels away as if the viewer is brushing leaves from a forest floor, revealing new archaeological information with every tear or rip.

While the faded colors and torn wallpaper evoke nostalgia and memory, they also produce a violent sense of the “now.” This violence is similar to the specific way torn and scratched surfaces represent wartime violence and scarcity in French postwar painting—for example, in the torn posters of Raymond Hains’s décollages, such as La Gitane (1964), and the scratchitti covering Dubuffet’s Wall with Inscriptions (1945). The rupture of time in these torn surfaces is distinctly unsentimental, yet it reminds the viewer that the past is always layered upon the present via inscription, language, or form. French philosopher Henri Bergson wrote in Matter and Memory that “the pure present is an ungraspable advance of the past devouring the future. In truth, all sensation is already memory.” With these lines, Bergson defined the philosophical problem of time and representation: we can never truly represent the experience of being in the world at the moment because any representation fixates what is represented as already in the past. The present, therefore, can only be sensed. This idea, formulated at the end of the nineteenth century, is very pertinent to Brisson’s work. Brisson’s layered surfaces give a piercing, sensuous experience of the now constructed through the viewer’s unique experience in front of the canvas as well as the sense that the viewer is excavating or experiencing a trace, a memory of a time already passed, or an image fading into memory. Each painting contradicts Bergson and advocates that these two layers of time can exist simultaneously.

There is pertinence to the distinctly French character of the references his works evoke, for Brisson’s work continues the lineage of French twentieth-century painting. While Brisson spent many years in Paris, his painterly practice is proudly rooted in southern France, and like Henri Matisse and other painters of the postwar École de Nice he draws on the ravishing geographic beauty of the Mediterranean. Brisson, who has revisited the paper cuts and floral motifs of Henri Matisse, has been called a “neo-Fauvist.” The first of the avant-garde movements that flourished in France in the early years of the twentieth century, the Fauves (“wild beasts”) favored bold, often oppositional colors and a subjective response to nature. Like the Fauves, Brisson’s relationship with nature breaks with Impressionism’s sensibility evoked through plein-air paintings, and like the Fauves, his colors (aquamarine, cobalt blue, Pompeian red) evoke emotion, perceptual joy, and relations among colored planes on the canvas. Nature becomes the link between observation of the natural world and the treatment of it in the painter’s studio. An even deeper consideration of Matisse’s philosophical investigations offers a conceptual lens through which to view Brisson’s work. In Pierre Marie’s recent paintings, motifs conduct doublings, varieties, and repetitions. The figure of a paper-cut palm frond returns as the missing figure from the remainder of the paper or is reflected in the floral pattern of the wallpaper appearing underneath. Matisse repeatedly de-emphasizes individual objects, claiming, “I see too many things to be able to commit myself to a single one.” Matisse would repeat patterns across materialities within the same painterly space. Plants would sit on a table whose legs were made from wrought iron

plants, an ornate chair with plants would rest in front of a floral textile sample. These various materialities share a pattern quality; as with the slow investigations of Brisson’s seagulls, the materials guide the eye to other spaces the viewer cannot see. The motifs of palm fronds and flowers in Brisson’s recent work move in cycles, like forms in nature. A rhythm runs through these repetitions. Composition and rhythm are like a fugue in which the artist returns over and over again to the same theme or like a jazz musician who visits the same motif to allow for wild experimentation on an oft-quoted reference. Brisson, who has himself acknowledged his dedication to jazz from Orléans, is precisely like the musician returning to the same refrain to experiment with its structure and rhythm. In Matisse’s work, as in jazz, each element blends together as an ensemble. In Brisson’s work, the viewers are at once present with the object in the painter’s studio, their memories, and their minds. Constantly reappearing, these motifs give a renewed sense of both history and language being written. Brisson’s paintings reveal the ephemeral quality of being human and the fragile language through which humans claim to document their experience as humans. His work chronicles the underlying pulse of art through life—its ability to recall our past, reflect our present, and envision our future. Maibritt Borgen Art Historian, New York

His distinct multilayered surfaces and ensembles of repeated organic and mythical motifs carry on from previous works, now congealing in a pictorial language in full bloom. 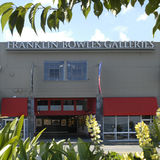