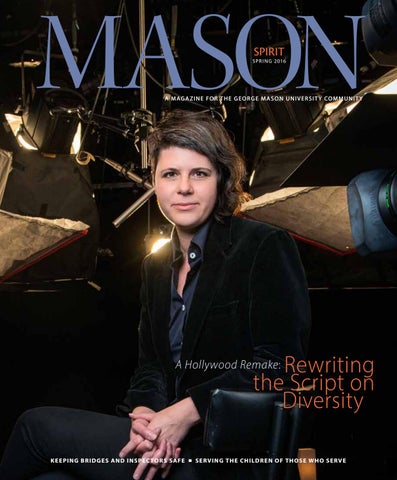 Rewriting the Script on Diversity

Mason’s growing Film and Video Studies Program is incredibly diverse in an industry that isn’t. Director Giovanna Chesler is building a competitive film program that she hopes the Hollywood film industry will one day resemble.

George Mason University Film and Video Studies (FAVS) majors, she asks them to look around the room.

“You need to get to know these people,” she tells them. “Film is about collaboration.” And she means it. Since she became director of the degree program in 2013, Chesler has been working to leverage George Mason’s diversity and entrepreneurship to build a solid film program that matters.

“One of the most important things for me as a filmmaker and an educator is the crisis that our industry faces,” she says. “So few women are in directing or cinematography positions. So few artists of color are working in Hollywood. Our students are diverse, but our industry isn’t.”

What does it mean to have a film program at one of the most diverse schools in the country? Chesler believes this program and these students can make a difference. “As a faculty, we work with our programming, course content, and Visiting Filmmakers Series (led by Film and Media Studies professor Cynthia Fuchs) to mirror an industry back to the students that we believe can exist. ” Chester also believes one of the ways to effect industry change is by having a frank conversation at the undergraduate level. “We encourage students to think about their own bias when they are crewing up their films. We make sure they are reminded of the problems in our industry so they carefully consider their choices.” Spring 2016  M A S O N S P I R I T  | 17

Even the process of making student films is different at Mason. Some film schools like University of Southern California or Virginia Commonwealth University pay for their student films and, in turn, own the films. As a result, the school also makes decisions about who gets to direct those films. Mason does not. “We see the benefits in both models. But ultimately, our faculty believe in the importance of students making the choice as to what they want their role in film to be,” she says. “Students who want to direct, do.” That’s where entrepreneurship plays a role. As a first-generation college graduate, Chesler is committed to creating an academic environment that is conscious of a student’s financial situation.

Our students are not afraid to tackle issues such as mental illness,

gender-based violence, and disability. They feel competent enough to address some of the critical issues facing society and to use the language of cinema to

connect that to an audience.

“Our students don’t have a lot of financial backing for their film projects. Many are working jobs to pay for school,” Chesler says. “So when something looks good on screen, it often came through tremendous sacrifice.”

eaching students about business practices and fundraising is a core part of the education they get at Mason. The FAVS Program has an active advisory board of film professionals and film lovers that provides scholarships and seed money to students. Each fall and spring, students pitch their films to a panel in order to get support for their projects. Board members work with students in advance of these pitch sessions to help them fine-tune their presentations.

Chesler’s goal is to build a strong undergraduate film and video program that can compete with the best schools not only in the region, but in the country. The opportunity to learn from working filmmakers inside the classroom— such as Ben Steger, Lisa Thrasher, and Hans Charles—and in the field is key. To do so, the program is partnering with the Virginia Film Office and professional organizations such as Women in Film and Video DC to connect Spring 2016  M A S O N S P I R I T  | 19

Mason students to the professional community and create opportunities for students to get hands-on experience. Professional internships are a requirement, and Mason students have worked with more than 100 companies in the region, including radio and television stations, production companies, and editing houses. One of these relationships is with the Washington NFL team, which hires a few Mason film students each summer. “They are learning to be professional on set while they are still students,” says Chesler. “We want production companies to know that we have students capable of working at that level and to work with the state to attract more film projects in this region.”

The FAVS Program is growing quickly. In 2006, former director Cindy Lont started FAVS as an interdisciplinary program with 30 students in collaboration with the Film and Media Studies Program, the

This year, we lost a director whose piercing and unique

In 2015, the film I most recently produced opened PBS’s

vision changed the frame forever. In this—her most

of independently produced documentary films. Of the

films POV has broadcast to the American public for de-

challenge viewers to reconsider the basic elements of

cades, none has been more striking or important than

cinema: time, space, and the ways in which women are

perspective as a gay African American man living in San Francisco in the late 1980s. Riggs spoke to a community of gay men of color, reenacting moments of moving through and claiming space that linger and reflect intersections of race and sexuality in America.

Communication Department, and the Schools of Theater and Art. FAVS now has more than 170 students in its bachelor of arts program and has added faculty. And there is no shortage of applicants to the undergrad program. “Not only has FAVS grown, but the films have also matured,” says Chesler of the quality of work. “Our students are not afraid to tackle issues such as mental illness, gender-based violence, and disability. They feel competent enough to address some of the critical issues facing society and to use the language of cinema to connect that to an audience.”

DA ’00, won a Telly, a Webby, and six Cinema in Industry (CINDY) awards. Ard Laoch na hEireann (Hero of Ireland), a film made by recent Mason graduate and Irish filmmaker Paul O’Halloran, BA Film and Video Studie ’14, was selected for a number of film festivals around the world. It also isn’t surprising that collaboration has led students to start a number of production companies. Members of the Hand-Me-Down Films crew, for instance, have been working together since they were freshmen at Mason.

“[The program] was definitely an incubator,” says Hand-MeThe FAVS faculty is also working to showcase Mason stu- Down founder Zack Gross, BA Film and Video Studies dent films in the region. They pull together a collection of ’14. “It was the teachers encouraging us to find our ‘group.’ the best films from the fall and spring on-campus film fes- I think we all inadvertently took that to heart.” tivals. Called the Best of FAVS, these films were shown at Jamie Rogers contributed to this article. the Virginia Film Festival in November. Mason also participates in Washington West and DC Shorts, one of the top short film festivals in the country. And the awards are pouring in. Last year Mason students in the FAVS 399 Web Series course, taught by Susan Kehoe,

The Dreamlife of Angels

This film captures a sense of intimacy and ur-

The performance of Gugu Mbatha-Raw is

This ecstatic film resonates with me around

masterful and Bythewood excels at working

the themes of love, faith, and absurdity.

young homeless women in the midst of their

with actors. Here, she takes time to move

Campion is an early influence on my thinking

characters through internal challenges and

middle-class family they do not know.

radical transformations that make the film

I wanted to live and breathe cinema forever.

In Holy Smoke, her humor shines. I have

taking: the camera is loose, yet the lighting is

closely watched each of Campion’s film

Nate Parker whose groundbreaking film The

to the recent TV series Top of the Lake.

“I am both heartbroken and frustrated about the lack of inclusion. This is a difficult but important

hat does it mean to teach a diverse

In Professor Thomas Britt’s Ethics of Film and Video course,

group of students a craft in an inacces-

sible industry? I have asked myself this

cur on both sides of the camera, as well as how included

question frequently over the past 15

and excluded perspectives affect viewers. In the Business

years of university teaching. Our media industry is under increasing (and deserved) scrutiny. It is being asked to address the ways in which women and artists of color have been excluded on both sides of the camera. For every Ava DuVernay, Shonda Rhimes, Jenji

of Film and Video, instructor Lisa Thrasher’s students explore industry standard business models and alternative modes of distribution, exhibition, and funding as means to empower diversity of voice within the industry or create their own. In partnering with Cynthia Fuchs and the Film and Media Studies Program, our Visiting Filmmakers Series brings internationally recognized filmmakers to campus who reflect the industry as we want it to exist.

Kohan, and Aziz Ansari who work

Within Mason resides the charge to do things differently

with performers and crews of color,

and to address issues of access, power, and inclusion. The

and who reflect gendered and sex-

uality spectrums, there are thou-

ship, and accessibility—all things that the FAVS Program

exemplifies. We believe that in teaching artists entrepre-

and writers plugging away at stan-

neurial skills, they learn to work independently and within

dard fare that does not reflect the

a changing industry, allowing for greater inclusion. This is

world in which we live. This industry is clouded by power, and those in it, know-

why teaching in and directing this program at this time could not be more meaningful.

ingly or not, work to sustain a system in which women

From the beginnings of this industry, film technologists

crafted our tools for a specific type of body. Film lighting

tesquely othered, and nameless people of color are ab-

equipment was designed for Caucasian skin, and tripods

sent (or killed first) on screen. As producer Effie Brown

were built for the average height of a Western man. There

highlighted in her on-screen debate with Matt Damon on

is as much to dismantle as there is to create. We owe it to

Project Greenlight, representations are much about who is

there will be a place for all talented artists in the industry. That being said, we are striving to build a program that gives our graduates the tools to create their own. —Giovanna Chesler Director, Film and Video Studies *Hollywood Diversity Report at UCLA and Race/Ethnicity in 600 Popular Films at USC