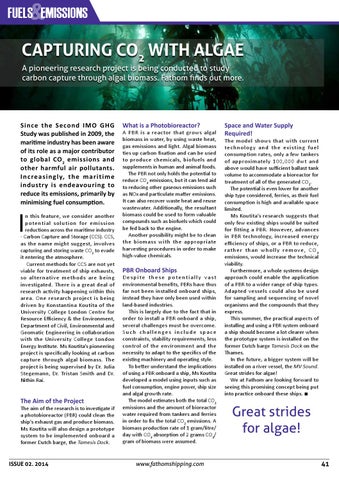 CAPTURING CO2 WITH ALGAE A pioneering research project is being conducted to study carbon capture through algal biomass. Fathom finds out more.

Since the Second IMO GHG Study was published in 2009, the maritime industry has been aware of its role as a major contributor to global CO 2 emissions and other harmful air pollutants. I n c re a s i n g l y, t h e m a r i t i m e industry is endeavouring to reduce its emissions, primarily by minimising fuel consumption.

n this feature, we consider another potential solution for emission reductions across the maritime industry - Carbon Capture and Storage (CCS). CCS, as the name might suggest, involves capturing and storing waste CO2 to evade it entering the atmosphere.  Current methods for CCS are not yet viable for treatment of ship exhausts, so alternative methods are being investigated. There is a great deal of research activity happening within this area. One research project is being driven by Konstantina Koutita of the University College London Centre for Resource Efficiency &amp; the Environment, Department of Civil, Environmental and Geomatic Engineering in collaboration with the University College London Energy Institute. Ms Koutita’s pioneering project is specifically looking at carbon capture through algal biomass. The project is being supervised by Dr. Julia Stegemann, Dr. Tristan Smith and Dr. Nithin Rai.

The Aim of the Project

The aim of the research is to investigate if a photobioreactor (PBR) could clean the ship’s exhaust gas and produce biomass. Ms Koutita will also design a prototype system to be implemented onboard a former Dutch barge, the Tamesis Dock.

What is a Photobioreactor?

A PBR is a reactor that grows algal biomass in water, by using waste heat, gas emissions and light. Algal biomass ties up carbon fixation and can be used to produce chemicals, biofuels and supplements in human and animal foods.  The PBR not only holds the potential to reduce CO2 emissions, but it can lend aid to reducing other gaseous emissions such as NOx and particulate matter emissions. It can also recover waste heat and reuse wastewater. Additionally, the resultant biomass could be used to form valuable compounds such as biofuels which could be fed back to the engine.  Another possibility might be to clean the biomass with the appropriate harvesting procedures in order to make high-value chemicals.

Despite these potentially vast environmental benefits, PBRs have thus far not been installed onboard ships, instead they have only been used within land-based industries.  This is largely due to the fact that in order to install a PBR onboard a ship, several challenges must be overcome. Such challenges include space constraints, stability requirements, less control of the environment and the necessity to adapt to the specifics of the existing machinery and operating style.  To better understand the implications of using a PBR onboard a ship, Ms Koutita developed a model using inputs such as fuel consumption, engine power, ship size and algal growth rate.  The model estimates both the total CO2 emissions and the amount of bioreactor water required from tankers and ferries in order to fix the total CO2 emissions. A biomass production rate of 1 gram/litre/ day with CO2 absorption of 2 grams CO2/ gram of biomass were assumed.

The model shows that with current technology and the existing fuel consumption rates, only a few tankers of approximately 100,000 dwt and above would have sufficient ballast tank volume to accommodate a bioreactor for treatment of all of the generated CO2.  The potential is even lower for another ship type considered, ferries, as their fuel consumption is high and available space limited.  Ms Koutita’s research suggests that only few existing ships would be suited for fitting a PBR. However, advances in PBR technology, increased energy efficiency of ships, or a PBR to reduce, rat h e r t h a n w h o l l y re m o ve , CO 2 emissions, would increase the technical viability.  Furthermore, a whole systems design approach could enable the application of a PBR to a wider range of ship types. Adapted vessels could also be used for sampling and sequencing of novel organisms and the compounds that they express.  This summer, the practical aspects of installing and using a PBR system onboard a ship should become a lot clearer when the prototype system is installed on the former Dutch barge Tamesis Dock on the Thames.  In the future, a bigger system will be installed on a river vessel, the MV Sound. Great strides for algae!  We at Fathom are looking forward to seeing this promising concept being put into practice onboard these ships. ∎

Ship Efficiency: The Insight is dedicated to providing the most up-to-date news on ship efficiency and clean technology developments in the maritime industry. Published by Fathom Maritime Intelligence, this quarterly magazine endeavours to deliver comprehensive, independent insight and reporting from the frontline of technological innovation, commercial activities, academic and industry research, and regulatory developments.