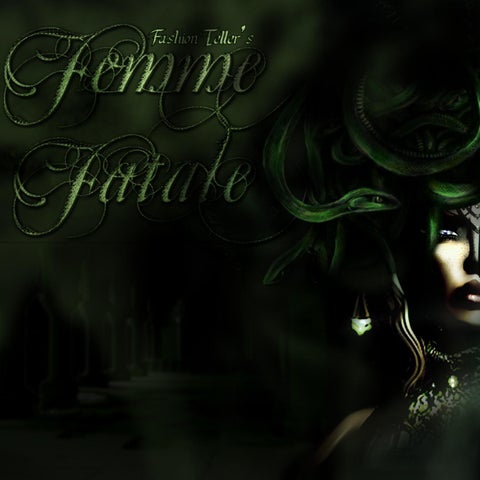 The Fashion Teller is very proud to present an amazing story book that will entice, enslave and exterminate with just one look... ”FEMME FATALE”.

We are taking history’s deadliest and most irresistible women “Fact or Fiction” and making them come to life in a High Fashion, High Quality Story Book Spread. We are very honored to spotlight the designs of Bliss Couture, Champagne! Sparkling Couture, Mea Culpa, NV Corsetry, Pipins, Vero Modero and Wildchild & Muse. The extraordinary one of a kind designs are a perfect fit in making each Femme Fatale come alive. Let us take you on a journey and meet each seductive deadly temptress. Turn the page and enjoy the dangerous ride... COVER MODEL: Anna Sapphire INTRO MODELS: VIXEN: Jade Spectre in Bliss Couture BODYGUARDS: RicoRacer Flux & Editorial Clarity in Garbriel Tux PHOTOGRAPHER: Enzo Champagne

Medusa was once the most ravishingly beautiful maiden in Athenaâ&#x20AC;&#x2122;s temple, the jealous aspiration of many suitors. One day, she was caught being raped by the God Poseidon in which the enraged Athena transformed Medusaâ&#x20AC;&#x2122;s beautiful hair to serpents and made her face so terrible to behold that the mere sight of it would turn onlookers to stone. Medusa: Anna Sapphire Co-Star: Tyler Barineaux OUTFIT: Champagne! Sparkling Couture PHOTOGRAPHER: Enzo Champagne

Heart pounding heavily in his chest, a brave young soldier trudged through the forest where a very deadly foe resides. Sweat pouring from his body, he knows that each step he takes can lead to his early demise. A hissing sound came from behind and the soldier turned to raise his sword but all it took was just one look. Seconds turned to eternity as his life flashes across his eyes and his body was slowly turning into stone. Medusa smiled, enjoying the latest addition to her collection. PHOTOGRAPHER: Pam Astonia

Cleopatra was an Egyptian Queen who conquered Rome and ruled Egypt with her power, wit and striking beauty. Her legendary attractiveness and sexual appeal boasts successive conquests of the worldâ&#x20AC;&#x2122;s most powerful men and commanded a loyal army to her every need. Cleopatra: Carley Benazzi Co-Star: Jade Spectre OUTFIT: Champagne! Sparkling Couture PHOTOGRAPHER: Enzo Champagne

The beautiful Queen hardly noticed the life of luxury and the servants around her as she lounged and contemplated on her next powerful move. Her mind was working overtime as the wheels in her head kept turning on how to use her exotic beauty and powers of seduction to get what she wants. Queen Cleopatra of Egypt wanted nothing less than the world and she will seduce legions of armies to fulfill her every need. PHOTOGRAPHER: Pam Astonia

The Ancient Roman Gods created Pandora out of clay and endowed her with many gifts including beauty and knowledge. They also bestowed in her the gift of human curiosity which led her to set forth to the world eternal sickness and evil. Pandora: Rissa Friller OUTFIT: Wildchild and Muse PHOTOGRAPHER: Enzo Champagne

Pandora Scene Pandora, who was filled with morbid curiosity, tiptoed across the room to the beautiful ornate box. She has been warned never to open the enticing object but the burning thirst for knowledge was too strong. With trembling hands, she opened the container and out flew every kind of disease and sickness, hate and envy, and all the evil the world never knew before. She slammed the box shut but it was too late as the last of the content came out.....it was hope. Pandora: Carilynn OHare OUTFIT: Wildchild and Muse PHOTOGRAPHER: Pam Astonia

Delilah was a beautiful and very persuasive seductress who single handedly brought down one of the worldâ&#x20AC;&#x2122;s strongest man...Samson. Using her powers of seduction and deception, she brought down the mighty Samson to his knees and traded his love for money. Delilah: Aphrodite Brianna Co-Star: Apollo Call OUTFIT: Pipins PHOTOGRAPHER: Enzo Champagne

Delilah finally wore down Samson with her feminine wiles and intoxicating beauty that gained her access to the secret of his strength. Tonight, she will bring the worldâ&#x20AC;&#x2122;s strongest man to his knees. She sang a sweet lullaby as Samson was falling quietly asleep in her lap. Without a single thought, she started cutting the source of his power. As each lock of hair fell to the ground, Samsonâ&#x20AC;&#x2122;s doom came without a sound. PHOTOGRAPHER: Spartin Parx

Jezebel was an ancient Queen of Israel who defines wickedness and evil in the bible. This depraved seductress has been denounced as a murderer, prostitute and enemy of God. Jezebel directly attempted to overthrow the worship of God and committed some of the most vile and perverted behavior imaginable. Jezebel: Linda Reddevil OUTFIT: Vero Modero PHOTOGRAPHER: Enzo Champagne

Jezebel writhed and thrusted her body in the throes of lustful passion as she performed her daily ritual of offerings and sacrifices to her pagan Gods. She will make sure all the people in the land will worship her or else her wrath will befall them without care. PHOTOGRAPHER: Stephy Maldor

Mata Hari was an exotic dancer and courtesan who became involved in espionage for Germany during World War 1. She was known for her sensuality and eroticism especially when she performed her provocative dance to lure men out of their dangerous secrets. Her name is synonymous with seduction and treachery. Mata Hari: Sora Tatham OUTFIT: Vero Modero PHOTOGRAPHER: Enzo Champagne

Marie LaVeau was the most powerful Voodoo Queen and High Priestess to have ever lived. She has the dark power to cast spells, call up the gods and demons of Voodoo and mesmerize anyone she catches in a glance. She was exceptionally beautiful and can entrance anyone to do as she bids. Marie Laveau: Applonia Criss OUTFIT: Champagne! Sparkling Couture PHOTOGRAPHER: Enzo Champagne

One dark and stormy night, Marie Laveau was busy performing a very dark and dangerous blood drenched ritual. Her body trembled with agitated power as she made an animal sacrifice to call the voodoo spirits. She was in a livid mad trance, her body moving rhythmically like a wild dance. She will make someone suffer and she can do it like no other. PHOTOGRAPHER: Spartin Parx

Morgane LeFay Morgane Le Fay was the most powerful sorceress during the times of King Arthur. She possessed a gifted intellect and many abilities such as her ability to mystically manipulate the environment, cast illusions, project mystical bolts, create mystical force shields, transform into other shapes, and remove spirits from their bodies and place those spirits under her control. Morgan LeFay: Wicca Merlin Co-Star: Todd Anton OUTFIT: NV Corsetry PHOTOGRAPHER: Enzo Champagne

A great battle was waged between two very powerful sorcerers bringing the world into complete chaos. It was as if the world was about to end as the earth trembled and the mountains crumbled. Morgane Le Fay will not surrender until the powerful Merlin is defeated. This evil enchantress will continue to fight until her wicked appetite is sated. PHOTOGRAPHER: Spartin Parx

The Evil Queen was a very beautiful but vain, wicked and merciless royalty that possessed a magical mirror which allows her to look upon her every wish. She was feared all across her kingdom and anyone who dared to challenge her will be eliminated. Evil Queen: Ellendir Khandr OUTFIT: Bliss Couture PHOTOGRAPHER: Enzo Champagne

Mirror mirror on the wall, who is the fairest of them all? Not this dark soul, thatâ&#x20AC;&#x2122;s for sure. Her beauty is but an evil lure. Devouring the youth from young girls in the town, To maintain her looks and slow her aging down. She craves to devour the heart of Snow White, To once and for all end her aging plight. PHOTOGRAPHER: Spartin Parx

The Sirens The Sirens were dangerous and devious sea nymphs with a head of a beautiful woman and a body of a bird. They sang such an enchanting and enticing sweet song which no one can resist. They lured sailors with their hypnotizing melodies and voices to shipwreck on the rocky coast of their island. Once you let their music get into your head, it wonâ&#x20AC;&#x2122;t be long until youâ&#x20AC;&#x2122;re dead. The Sirens: LovelyMiwako7399 Menna, SD Damiano, VeronicaLynn Parx OUTFIT: Mea Culpa PHOTOGRAPHER: Enzo Champagne

The ocean was eerie calm and peaceful when suddenly a sweet and enchanting song filled the air. The beautiful Sirens sang in perfect melody as the ship approached, their sweet music hypnotizing the sailors in euphoric paralysis. And thatâ&#x20AC;&#x2122;s the last that the men were heard, many assume that they were dead. PHOTOGRAPHER: Spartin Parx

The Fashion Teller is very proud to present an amazing story book that will entice, enslave and exterminate with just one look... ”FEMME FA...

The Fashion Teller is very proud to present an amazing story book that will entice, enslave and exterminate with just one look... ”FEMME FA...