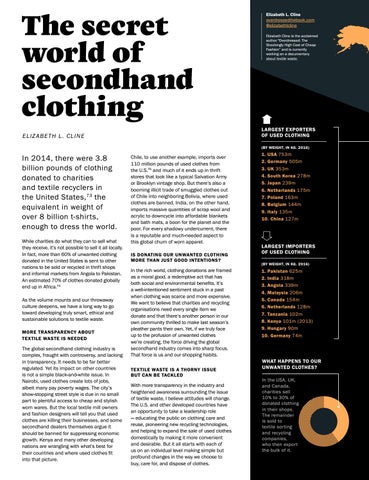 The secret world of secondhand clothing

Elizabeth L. Cline overdressedthebook.com @elizabethlcline Elizabeth Cline is the acclaimed author "Overdressed: The Shockingly High Cost of Cheap Fashion” and is currently working on a documentary about textile waste.

In 2014, there were 3.8 billion pounds of clothing donated to charities and textile recyclers in the United States, 73 the equivalent in weight of over 8 billion t-shirts, enough to dress the world. While charities do what they can to sell what they receive, it’s not possible to sell it all locally. In fact, more than 60% of unwanted clothing donated in the United States is sent to other nations to be sold or recycled in thrift shops and informal markets from Angola to Pakistan. An estimated 70% of clothes donated globally end up in Africa.74 As the volume mounts and our throwaway culture deepens, we have a long way to go toward developing truly smart, ethical and sustainable solutions to textile waste. MORE TRANSPARENCY ABOUT TEXTILE WASTE IS NEEDED

The global secondhand clothing industry is complex, fraught with controversy, and lacking in transparency. It needs to be far better regulated. Yet its impact on other countries is not a simple black-and-white issue. In Nairobi, used clothes create lots of jobs, albeit many pay poverty wages. The city’s show-stopping street style is due in no small part to plentiful access to cheap and stylish worn wares. But the local textile mill owners and fashion designers will tell you that used clothes are killing their businesses, and some secondhand dealers themselves argue it should be banned for suppressing economic growth. Kenya and many other developing nations are wrangling with what’s best for their countries and where used clothes fit into that picture.

Chile, to use another example, imports over 110 million pounds of used clothes from the U.S.75 and much of it ends up in thrift stores that look like a typical Salvation Army or Brooklyn vintage shop. But there’s also a booming illicit trade of smuggled clothes out of Chile into neighboring Bolivia, where used clothes are banned. India, on the other hand, imports massive quantities of scrap wool and acrylic to downcycle into affordable blankets and bath mats, a boon for the planet and the poor. For every shadowy undercurrent, there is a reputable and much-needed aspect to this global churn of worn apparel. IS DONATING OUR UNWANTED CLOTHING MORE THAN JUST GOOD INTENTIONS?

In the rich world, clothing donations are framed as a moral good, a redemptive act that has both social and environmental benefits. It’s a well-intentioned sentiment stuck in a past when clothing was scarce and more expensive. We want to believe that charities and recycling organisations need every single item we donate and that there’s another person in our own community thrilled to make last season’s pleather pants their own. Yet, if we truly face up to the profusion of unwanted clothes we’re creating, the force driving the global secondhand industry comes into sharp focus. That force is us and our shopping habits. TEXTILE WASTE IS A THORNY ISSUE BUT CAN BE TACKLED

With more transparency in the industry and heightened awareness surrounding the issue of textile waste, I believe attitudes will change. The U.S. and other developed countries have an opportunity to take a leadership role ­— educating the public on clothing care and reuse, pioneering new recycling technologies, and helping to expand the sale of used clothes domestically by making it more convenient and desirable. But it all starts with each of us on an individual level making simple but profound changes in the way we choose to buy, care for, and dispose of clothes.

LARGEST IMPORTERS OF USED CLOTHING (BY WEIGHT, IN KG. 2016)

WHAT HAPPENS TO OUR UNWANTED CLOTHES? In the USA, UK, and Canada, charities sell 10% to 30% of donated clothing in their shops. The remainder is sold to textile sorting and recycling companies, who then export the bulk of it. 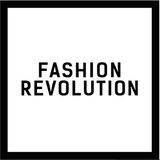 The second issue of the Fashion Revolution fanzine #lovedclotheslast explores the issue of waste and mass-consumption in the fashion industr...

The second issue of the Fashion Revolution fanzine #lovedclotheslast explores the issue of waste and mass-consumption in the fashion industr...