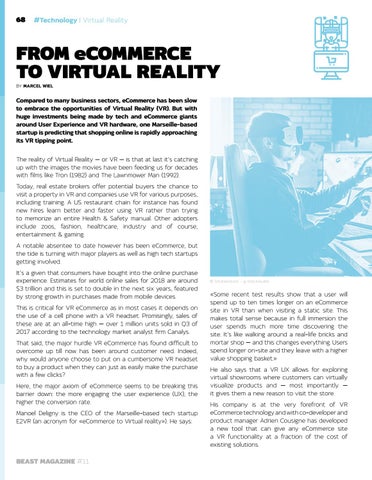 FROM eCOMMERCE TO VIRTUAL REALITY

Compared to many business sectors, eCommerce has been slow to embrace the opportunities of Virtual Reality (VR). But with huge investments being made by tech and eCommerce giants around User Experience and VR hardware, one Marseille-based startup is predicting that shopping online is rapidly approaching its VR tipping point. The reality of Virtual Reality — or VR — is that at last it’s catching up with the images the movies have been feeding us for decades with films like Tron (1982) and The Lawnmower Man (1992). Today, real estate brokers offer potential buyers the chance to visit a property in VR and companies use VR for various purposes, including training. A US restaurant chain for instance has found new hires learn better and faster using VR rather than trying to memorize an entire Health & Safety manual. Other adopters include zoos, fashion, healthcare, industry and of course, entertainment & gaming. A notable absentee to date however has been eCommerce, but the tide is turning with major players as well as high tech startups getting involved. It’s a given that consumers have bought into the online purchase experience. Estimates for world online sales for 2018 are around $3 trillion and this is set to double in the next six years, featured by strong growth in purchases made from mobile devices. This is critical for VR eCommerce as in most cases it depends on the use of a cell phone with a VR headset. Promisingly, sales of these are at an all-time high — over 1 million units sold in Q3 of 2017 according to the technology market analyst firm Canalys. That said, the major hurdle VR eCommerce has found difficult to overcome up till now has been around customer need. Indeed, why would anyone choose to put on a cumbersome VR headset to buy a product when they can just as easily make the purchase with a few clicks? Here, the major axiom of eCommerce seems to be breaking this barrier down: the more engaging the user experience (UX), the higher the conversion rate. Manoel Deligny is the CEO of the Marseille-based tech startup E2VR (an acronym for «eCommerce to Virtual reality»). He says:

«Some recent test results show that a user will spend up to ten times longer on an eCommerce site in VR than when visiting a static site. This makes total sense because in full immersion the user spends much more time discovering the site. It’s like walking around a real-life bricks and mortar shop — and this changes everything. Users spend longer on-site and they leave with a higher value shopping basket.» He also says that a VR UX allows for exploring virtual showrooms where customers can virtually visualize products and — most importantly — it gives them a new reason to visit the store. His company is at the very forefront of VR eCommerce technology and with co-developer and product manager Adrien Cousigne has developed a new tool that can give any eCommerce site a VR functionality at a fraction of the cost of existing solutions. 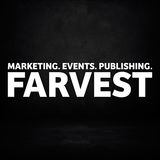