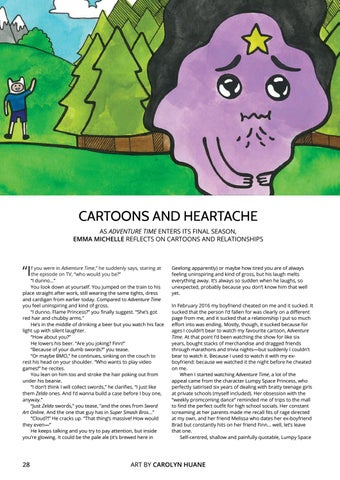 f you were in Adventure Time,” he suddenly says, staring at the episode on TV, “who would you be?” “I dunno...” You look down at yourself. You jumped on the train to his place straight after work, still wearing the same tights, dress and cardigan from earlier today. Compared to Adventure Time you feel uninspiring and kind of gross. “I dunno. Flame Princess?” you finally suggest. “She’s got red hair and chubby arms.” He’s in the middle of drinking a beer but you watch his face light up with silent laughter. “How about you?” He lowers his beer. “Are you joking? Finn!” “Because of your dumb swords?” you tease. “Or maybe BMO,” he continues, sinking on the couch to rest his head on your shoulder. “Who wants to play video games!” he recites. You lean on him too and stroke the hair poking out from under his beanie. “I don’t think I will collect swords,” he clarifies, “I just like them Zelda ones. And I’d wanna build a case before I buy one, anyway.” “Just Zelda swords,” you tease, “and the ones from Sword Art Online. And the one that guy has in Super Smash Bros...” “Cloud?!” He cracks up. “That thing’s massive! How would they even—” He keeps talking and you try to pay attention, but inside you’re glowing. It could be the pale ale (it’s brewed here in

Geelong apparently) or maybe how tired you are of always feeling uninspiring and kind of gross, but his laugh melts everything away. It’s always so sudden when he laughs, so unexpected, probably because you don’t know him that well yet. In February 2016 my boyfriend cheated on me and it sucked. It sucked that the person I’d fallen for was clearly on a different page from me, and it sucked that a relationship I put so much effort into was ending. Mostly, though, it sucked because for ages I couldn’t bear to watch my favourite cartoon, Adventure Time. At that point I’d been watching the show for like six years, bought stacks of merchandise and dragged friends through marathons and trivia nights—but suddenly I couldn’t bear to watch it. Because I used to watch it with my exboyfriend: because we watched it the night before he cheated on me. When I started watching Adventure Time, a lot of the appeal came from the character Lumpy Space Princess, who perfectly satirised six years of dealing with bratty teenage girls at private schools (myself included). Her obsession with the “weekly promcoming dance” reminded me of trips to the mall to find the perfect outfit for high school socials. Her constant screaming at her parents made me recall fits of rage directed at my own, and her friend Melissa who dates her ex-boyfriend Brad but constantly hits on her friend Finn… well, let’s leave that one. Self-centred, shallow and painfully quotable, Lumpy Space 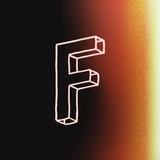