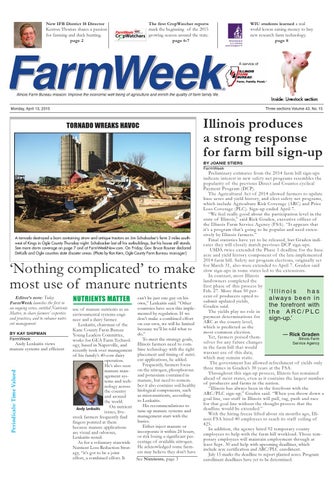 The first CropWatcher reports mark the beginning of the 2015 growing season around the state. page 6-7

‘Nothing complicated’ to make most use of manure nutrients Editor’s note: Today FarmWeek launches the first in an ongoing series, entitled Nutrients Matter, to share farmers’ expertise and practices, and to enhance nutrient management. BY KAY SHIPMAN FarmWeek

can’t be just one guy on his own,” Lenkaitis said. “Other countries have seen this implemented by regulation. If we don’t make a combined effort on our own, we will be limited because we’ll be told what to do.” To meet the strategy goals, Illinois farmers need to combine technology with the right placement and timing of nutrient applications, he added. Frequently, farmers focus on the nitrogen, phosphorous and potassium contained in manure, but need to remember it also contains soil-healthy biological components, such as micronutrients, according to Lenkaitis. His recommendations to tune up manure systems and management start with the basics. Either inject manure or incorporate it within 24 hours, or risk losing a significant percentage of available nitrogen. He acknowledged some farmers may believe they don’t have

use of manure nutrients as an environmental systems engineer and a dairy farmer. Lenkaitis, chairman of the Kane County Farm Bureau Young Leaders Committee, works for GEA Farm Technology, based in Naperville, and recently took over management of his family’s 40-cow dairy operation. He’s also seen manure management systems and technology across the country and around the world. On nutrient Andy Lenkaitis issues, livestock farmers frequently find fingers pointed at them because manure applications are visual and odorous, Lenkaitis noted. As for a voluntary statewide Nutrient Loss Reduction Strategy, “it’s got to be a joint effort, a combined effort. It See Nutrients, page 3

Preliminary estimates from the 2014 farm bill sign-ups indicate interest in new safety net programs resembles the popularity of the previous Direct and Counter-cyclical Payment Program (DCP). The Agricultural Act of 2014 allowed farmers to update base acres and yield history, and elect safety net programs, which include Agriculture Risk Coverage (ARC) and Price Loss Coverage (PLC). Sign-up ended April 7. “We feel really good about the participation level in the state of Illinois,” said Rick Graden, executive officer of the Illinois Farm Service Agency (FSA). “It appears that it’s a program that’s going to be popular and used extensively by Illinois farmers.” Final statistics have yet to be released, but Graden indicates they will closely match previous DCP sign-ups. USDA twice extended the Phase 1 deadline for the base acre and yield history component of the late-implemented 2014 farm bill. Safety net program elections, originally set for March 31, also were extended to April 7. Graden said slow sign-ups in some states led to the extensions. In contrast, most Illinois landowners completed the first phase of this process by Feb. 27. More than 50 per‘Illinois has cent of producers opted to a l way s b e e n i n submit updated yields, the forefront with Graden said. The yields play no role in the ARC/PLC payment determinations for sign-up.’ ARC at the county level, which is predicted as the most common election. — Rick Graden Yet, farmers poised themIllinois Farm selves for any future changes Service Agency in the farm bill that would warrant use of this data, which may remain static. The government has allowed refreshment of yields only three times in Graden’s 30 years at the FSA. Throughout this sign-up process, Illinois has remained ahead of most states, even as it contains the largest number of producers and farms in the nation. “Illinois has always been in the forefront with the ARC/PLC sign-up,” Graden said. “When you throw down a goal line, our staff in Illinois will pull, tug, push and race for that goal line without the thought process that the deadline would be extended.” With the hiring freeze lifted about six months ago, Illinois FSA hired 40 employees to reach its staff ceiling of 425. In addition, the agency hired 92 temporary county employees to help with the farm bill workload. Those temporary employees will maintain employment through at least Sept. 30 and help with upcoming deadlines, which include acre certification and ARC/PLC enrollment. July 15 marks the deadline to report planted acres. Program enrollment deadlines have yet to be determined.