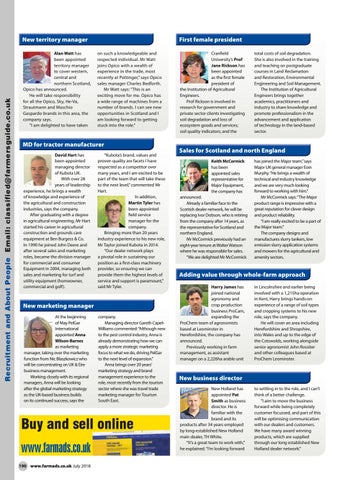 New territory manager Alan Watt has been appointed territory manager to cover western, central and northern Scotland, Opico has announced. He will take responsibility for all the Opico, Sky, He-Va, Strautmann and Maschio Gaspardo brands in this area, the company says. “I am delighted to have taken

First female president on such a knowledgeable and respected individual. Mr Watt joins Opico with a wealth of experience in the trade, most recently at Pottinger,” says Opico sales manager Charles Bedforth. Mr Watt says: “This is an exciting move for me. Opico has a wide range of machines from a number of brands. I can see new opportunities in Scotland and I am looking forward to getting stuck into the role.”

MD for tractor manufacturer David Hart has been appointed managing director of Kubota UK. With over 28 years of leadership experience, he brings a wealth of knowledge and experience of the agricultural and construction industries, says the company. After graduating with a degree in agricultural engineering, Mr Hart started his career in agricultural construction and grounds care equipment at Ben Burgess & Co. In 1990 he joined John Deere and after several sales and marketing roles, became the division manager for commercial and consumer Equipment in 2004, managing both sales and marketing for turf and utility equipment (homeowner, commercial and golf ).

“Kubota’s brand, values and proven quality are facets I have respected as a competitor over many years, and I am excited to be part of the team that will take these to the next level,” commented Mr Hart. In addition, Martin Tyler has been appointed field service manager for the company. Bringing more than 20 years industry experience to his new role, Mr Taylor joined Kubota in 2014. “Our dealer network plays a pivotal role in sustaining our position as a first-class machinery provider, so ensuring we can provide them the highest levels of service and support is paramount,” said Mr Tyler.

New marketing manager At the beginning of May PelGar International appointed Anna Wilson-Barnes as marketing manager, taking over the marketing function from Nic Blaszkowicz who will be concentrating on UK & Eire business management. Working closely with its regional managers, Anna will be looking after the global marketing strategy as the UK-based business builds on its continued success, says the

company. Managing director Gareth CapelWilliams commented: “Although new to the pest control industry, Anna is already demonstrating how we can apply a more strategic marketing focus to what we do, driving PelGar to the next level of expansion.” Anna brings over 20 years’ marketing strategy and brand management experience to the role, most recently from the tourism sector where she was travel trade marketing manager for Tourism South East.

Cranfield University’s Prof Jane Rickson has been appointed as the first female president of the Institution of Agricultural Engineers. Prof Rickson is involved in research for government and private sector clients investigating soil degradation and loss of ecosystem goods and services; soil quality indicators; and the

total costs of soil degradation. She is also involved in the training and teaching on postgraduate courses in Land Reclamation and Restoration, Environmental Engineering and Soil Management. The Institution of Agricultural Engineers brings together academics, practitioners and industry to share knowledge and promote professionalism in the advancement and application of technology in the land-based sector.

Sales for Scotland and north England Keith McCormick has been appointed sales representative for Major Equipment, the company has announced. Already a familiar face to the Scottish dealer network, he will be replacing Ivor Dobson, who is retiring from the company after 14 years, as the representative for Scotland and northern England. Mr McCormick previously had an eight-year tenure at Walter Watson where he was responsible for sales. “We are delighted Mr McCormick

has joined the Major team,” says Major UK general manager Eoin Murphy. “He brings a wealth of technical and industry knowledge and we are very much looking forward to working with him.” Mr McCormick says: “The Major product range is impressive with a great reputation for clever design and product reliability. “I am really excited to be a part of the Major team.” The company designs and manufactures slurry tankers, low emission slurry application systems and mowers for the agricultural and amenity sectors.

Adding value through whole-farm approach Harry James has joined national agronomy and crop production business ProCam, expanding the ProChem team of agronomists based at Leominster in Herefordshire, the company has announced. Previously working in farm management, as assistant manager on a 2,226ha arable unit

in Lincolnshire and earlier being involved with a 1,215ha operation in Kent, Harry brings hands-on experience of a range of soil types and cropping systems to his new role, says the company. He will cover an area including Herefordshire and Shropshire, into Wales and up to the edge of the Cotswolds, working alongside senior agronomist John Rossiter and other colleagues based at ProChem Leominster.

New business director New Holland has appointed Pat Smith as business director. He is familiar with the brand and its products after 34 years employed by long-established New Holland main dealer, TH White. “It’s a great team to work with,” he explained. “I’m looking forward

to settling in to the role, and I can’t think of a better challenge. “I aim to move the business forward while being completely customer focussed, and part of this will be optimising communication with our dealers and customers. We have many award winning products, which are supplied through our long established New Holland dealer network.”