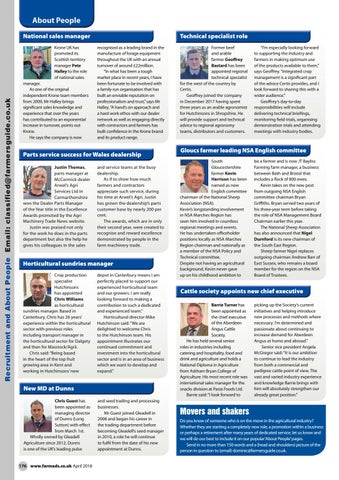 Krone UK has promoted its Scottish territory manager Pete Halley to the role of national sales manager. As one of the original independent Krone team members from 2009, Mr Halley brings significant sales knowledge and experience that over the years has contributed to an exponential increase in turnover, points out Krone. He says the company is now

Technical specialist role recognised as a leading brand in the manufacture of forage equipment throughout the UK with an annual turnover of around £22million. “In what has been a tough market place in recent years, I have been fortunate to be involved with a family run organisation that has built an enviable reputation on professionalism and trust,” says Mr Halley. “A hand’s on approach and a hard work ethos with our dealer network as well as engaging directly with contractors and farmers has built confidence in the Krone brand and its product range.

Parts service success for Wales dealership Justin Thomas, parts manager at McCormick dealer Arwel’s Agri Services Ltd in Carmarthenshire won the Dealer Parts Manager of the Year title in the Excellence Awards promoted by the Agri Machinery Trade News website. Justin was praised not only for the work he does in the parts department but also the help he gives his colleagues in the sales

and service teams at the busy dealership. As if to show how much farmers and contractors appreciate such service, during his time at Arwel’s Agri, Justin has grown the dealership’s parts customer base by nearly 200 per cent. The awards, which are in only their second year, were created to recognise and reward excellence demonstrated by people in the farm machinery trade.

depot in Canterbury means I am perfectly placed to support our experienced horticultural team and our growers. I am really looking forward to making a contribution to such a dedicated and experienced team.” Horticultural director Mike Hutchinson said: “We are delighted to welcome Chris to the Hutchinson team. His appointment illustrates our continued commitment and investment into the horticultural sector and is in an area of business which we want to develop and expand.”

New MD at Dunns Chris Guest has been appointed as managing director of Dunns (Long Sutton) with effect from March 1st. Wholly owned by Gleadell Agriculture since 2012, Dunns is one of the UK’s leading pulse

and seed trading and processing businesses. Mr Guest joined Gleadell in 2008 and began his career in the trading department before becoming Gleadell’s seed manager in 2010, a role he will continue to fulfil from the date of his new appointment at Dunns.

Former beef and arable farmer Geoffrey Bastard has been appointed regional technical specialist for the west of the country by Certis. Geoffrey joined the company in December 2017 having spent three years as an arable agronomist for Hutchinsons in Shropshire. He will provide support and technical advice to regional agronomy teams, distributors and customers.

“I’m especially looking forward to supporting the industry and farmers in making optimum use of the products available to them,” says Geoffrey. “Integrated crop management is a significant part of the advice Certis provides, and I look forward to sharing this with a wider audience.” Geoffrey’s day-to-day responsibilities will include delivering technical briefings, monitoring field trials, organising demonstration trials and attending meetings with industry bodies.

Gloucs farmer leading NSA English committee South Gloucestershire farmer Kevin Harrison has been named as new English committee chairman of the National Sheep Association (NSA). Kevin’s longstanding involvement in NSA Marches Region has seen him involved in countless regional meetings and events. He has undertaken officeholder positions locally as NSA Marches Region chairman and nationally as a member of the NSA Policy and Technical committee. Despite not having an agricultural background, Kevin never gave up on his childhood ambition to

be a farmer and is now JT Bayliss Farming farm manager, a business between Bath and Bristol that includes a flock of 800 ewes. Kevin takes on the new post from outgoing NSA English committee chairman Bryan Griffiths. Bryan served two years of his three-year term before taking the role of NSA Management Board Chairman earlier this year. The National Sheep Association has also announced that Nigel Durnford is its new chairman of the South East Region. Sheep farmer Nigel replaces outgoing chairman Andrew Barr of East Sussex, who remains a board member for the region on the NSA Board of Trustees.

Cattle society appoints new chief executive Barrie Turner has been appointed as the chief executive of the Aberdeen Angus Cattle Society. He has held several senior roles in industries including catering and hospitality, food and drink and agriculture and holds a National Diploma in Agriculture from Askham Bryan College of Agriculture. His most recent role was international sales manager for the snacks division at Pasta Foods Ltd. Barrie said: “I look forward to

picking up the Society’s current initiatives and helping introduce new processes and methods where necessary. I’m determined and passionate about continuing to increase demand for Aberdeen Angus at home and abroad.” Senior vice president Angela McGregor said: “It is our ambition to continue to lead the industry from both a commercial and pedigree cattle point of view. The vast and varied industry experience and knowledge Barrie brings with him will absolutely strengthen our already great position.”

Movers and shakers Do you know of someone who is on the move in the agricultural industry? Whether they are starting a completely new role, a promotion within a business or perhaps a retirement after many years of dedicated service, let us know and we will do our best to include it on our popular ‘About People’ pages. Send in no more than 150 words and a (head and shoulders) picture of the person in question to (email) dominic@farmersguide.co.uk.