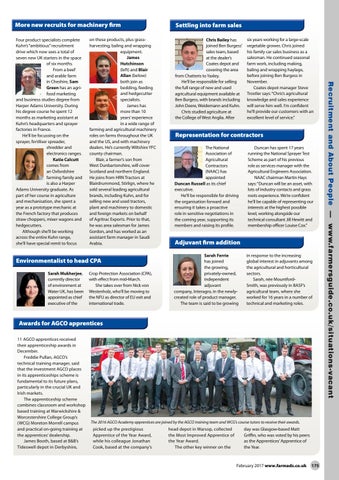 More new recruits for machinery firm on these products, plus grassharvesting, baling and wrapping equipment. James Hutchinson (left) and Blair Allan (below) both join as bedding, feeding and hedgecutter specialists. James has more than 10 years’ experience in a wide range of farming and agricultural machinery roles on farms throughout the UK and the US, and with machinery dealers. He’s currently Wiltshire YFC county chairman. Blair, a farmer’s son from West Dunbartonshire, will cover Scotland and northern England. He joins from HRN Tractors at Blairdrummond, Stirlign, where he sold several leading agricultural brands, including Kuhn, and for selling new and used tractors, plant and machinery to domestic and foreign markets on behalf of Agritrac Exports. Prior to that, he was area salesman for James Gordon, and has worked as an assistant farm manager in Saudi Arabia.

Environmentalist to head CPA Sarah Mukherjee, currently director of environment at Water UK, has been appointed as chief executive of the

Crop Protection Association (CPA), with effect from mid-March. She takes over from Nick von Westenholz, who’ll be moving to the NFU as director of EU exit and international trade.

Chris Bailey has joined Ben Burgess’ sales team, based at the dealer’s Coates depot and covering the area from Chatteris to Yaxley. He’ll be responsible for selling the full range of new and used agricultural equipment available at Ben Burgess, with brands including John Deere, Weidemann and Kuhn. Chris studied agriculture at the College of West Anglia. After

Representation for contractors The National Association of Agricultural Contractors (NAAC) has appointed Duncan Russell as its chief executive. He’ll be responsible for driving the organisation forward and ensuring it takes a proactive role in sensitive negotiations in the coming year, supporting its members and raising its profile.

Duncan has spent 17 years running the National Sprayer Test Scheme as part of his previous role as services manager with the Agricultural Engineers Association. NAAC chairman Martin Hays says: “Duncan will be an asset, with lots of industry contacts and grass roots experience. We’re confident he’ll be capable of representing our interests at the highest possible level, working alongside our technical consultant Jill Hewitt and membership officer Louise Cox.”

Adjuvant firm addition Sarah Ferrie has joined the growing, privately-owned, independent adjuvant company, Interagro, in the newlycreated role of product manager. The team is said to be growing

in response to the increasing global interest in adjuvants among the agricultural and horticultural sectors. Sarah, née MountfordSmith, was previously in BASF’s agricultural team, where she worked for 16 years in a number of technical and marketing roles.

The 2016 AGCO Academy apprentices are joined by the AGCO training team and WCG’s course tutors to receive their awards.

picked up the prestigious Apprentice of the Year Award, while his colleague Jonathan Cook, based at the company’s

head depot in Warsop, collected the Most Improved Apprentice of the Year Award. The other key winner on the

day was Glasgow-based Matt Griffin, who was voted by his peers as the Apprentices’ Apprentice of the Year.

Recruitment and About People — www.farmersguide.co.uk/situations-vacant

Four product specialists complete Kuhn’s “ambitious” recruitment drive which now sees a total of seven new UK starters in the space of six months. From a beef and arable farm in Cheshire, Sam Green has an agrifood marketing and business studies degree from Harper Adams University. During his degree course he spent 12 months as marketing assistant at Kuhn’s headquarters and sprayer factories in France. He’ll be focussing on the sprayer, fertiliser spreader, shredder and electronics ranges. Katie Calcutt comes from an Oxfordshire farming family and is also a Harper Adams University graduate. As part of her course in agriculture and mechanisation, she spent a year as a prototype mechanic at the French factory that produces straw choppers, mixer wagons and hedgecutters. Although she’ll be working across the entire Kuhn range, she’ll have special remit to focus