from The Journey - Fall 2020
by Farmer School of Business 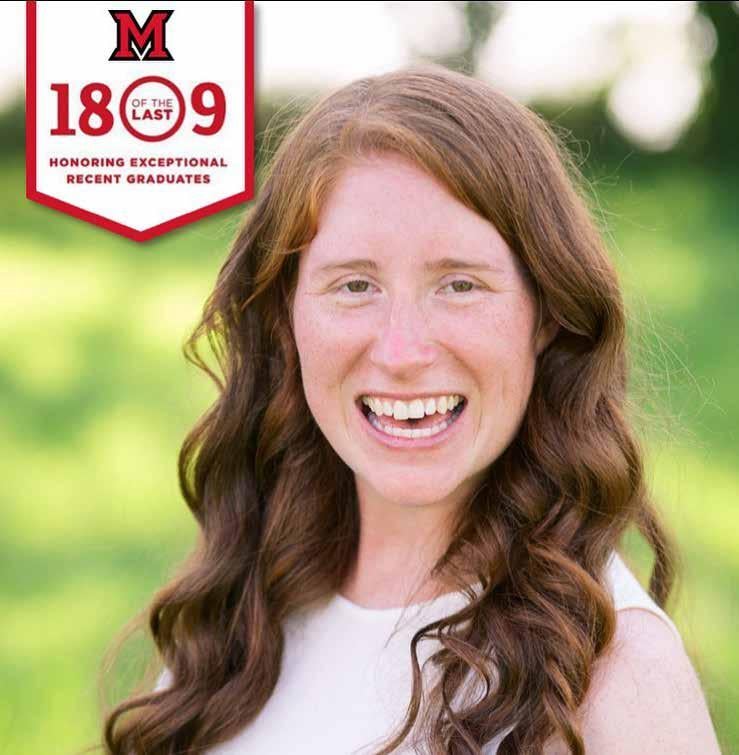 The Make It Miami Accountancy Program is designed to introduce top multicultural high school students to the accounting profession and to a college career at Miami University’s Farmer School of Business. The hope is that some of them will chose to come to Miami for college. In Esther Ladipo’s case, it worked perfectly.

By any standard, Esther certainly made a lot of her time at Miami. “I just had a fantastic experience while I was there. I learned a lot. I traveled a lot. I studied abroad twice, once in Cuba, once in Southeast Asia,” she explained. “I was involved with the Multicultural Business Association. I founded the Miami chapter of NABA, which is the National Association of Black Accountants, interned at Ernst and Young twice.”

But during her senior year, she made some big decisions. “I actually ended up changing my major, entering my senior year, to marketing because I decided I just didn’t want to do accounting full time. I wanted to do something a little bit more creative. So took the leap of faith and changed my major, and it ended up being one of the best things I could have ever done,” she said, noting that marketing faculty members Jan Taylor and Pat Lindsay gave her a lot of career advice.

She also decided to take part in something she’d never done before – Startup Weekend. “I had always seen it when I was at Miami, but I was just like, ‘I don’t know if I’m going to do it, I don’t know if I’m going to do it.’ Then it was my senior year. I had changed my major. I had just experienced so much change. I just said ‘Esther, put yourself out there and do it.’ I ended up pitching Connexer, an idea of having a platform that connected people to nonprofits and connected people to social organizations that were doing things in their community,” Ladipo said. “I don’t think we placed, but I got the Rock Star award for having a very compelling pitch.”

Ladipo said that experience and that idea stuck with her after the weekend ended. “I just couldn’t shake the idea. It just resonated so deeply with me. I saw that there was a need -- I could see in my peers that people wanted to give back, people wanted to volunteer, but there was no way for them to be able to do it easily and straight from their phone.”

“So I actually went to the Black World Studies department to ask for grant money to study homeless shelters across America, specifically homeless shelters that are within black and Latinx communities, because I just wanted to understand if this was actually a problem that nonprofits have,” she said. “The shelter directors all told me, ‘Money, money, money, we need money.’ And I would always ask them, ‘Why do you need money?’ Because what I learned in my entrepreneurship classes and as an entrepreneurship minor is to really try to get to the root answer. You can never ask ‘Why?’ too many times. So I would ask and ask and ask and basically it came down to the fact that they needed the money in order to do things or to get things.”

Esther came back to the Farmer School determined to find a way to bring her idea to fruition. Her next step was taking Mark Lacker’s ESP 401 New Ventures capstone class. “It’s basically a build-a-business-from-scratch class. We drove to the Brandery in Cincinnati every Monday and spoke to different startup founders, people that ran accelerators, and they would mentor us as we were going through the makings of our business,” she explained. “I changed the name to Ranowo, which means “to give” in the Nigerian language Yoruba. We pitched Ranowo at the end of the semester, and we got first place.”

She applied for a job at Facebook and was accepted, but others encouraged her to keep working on her idea. “Graduation day, Mark Lacker literally put his hand on my shoulder. He said “Esther, you have to do this. We are going to make this happen. Please let me know if you need anything. You have to promise me that you’re going to stick this out.”

She began working on Ranowo again in 2018, pivoting from her idea of a SAAS platform for nonprofits to one that would allow donors to purchase items and donate them directly to the nonprofits that needed them. Ladipo said that traditionally, more than half of people who donate to nonprofits don’t actually know where their money goes, something Ranowo works to change. “We saw that people were taking to the idea and were donating and seeing the exact items that the nonprofits needed. The nonprofits liked being able to record thank you videos that we then would send to the donors. And then it just turned into an organic thing of asking the nonprofits, ‘Hey, tell us what you’ve done with your items,’ and providing those insights to the donor and then seeing donors coming back to give again. We have been able to provide thousands of dollars’ worth of goods to non-profits within the last few months. It’s been beautiful to see Ranowo.org flourish within the last year.”

And Ladipo took Lacker up on his offer, becoming a client for his ESP 321 Agile Development course. “Mark has a class of students that are helping us on the business for the entire semester. Their goal is helping Ranowo.org scale for this upcoming giving season,” she said. It’s been great working with them and I’m really looking forward to seeing how we’re able to just scale out Ranowo and be able to help more people within these communities.”

This year, Esther was honored as one of two Farmer School alumni named as part of the 18 of the Last 9 by the Miami University Alumni association. “It was a great honor and I am among such great company. They’ve inspired me so much,” she said. “It was very humbling. I want to be able to make Miami even more proud, so I’m delighted that I have the opportunity to continue to do so.”

“I would love to be working on Ranowo full time and having enough support and enough funding to be able to build on it, to revolutionize giving to Black and Latinx communities and to make giving feel good. I want to be able to have the resources to be able to do that at scale.”

Looking back on her time in Oxford, she said that the biggest thing she learned was not being afraid to fail. “It’s a tough skill to learn because you have to fail and

build yourself up from that failure in order to keep going. But I know that’s something that Jim Friedman and the entrepreneurship department preached a lot, something that I got from Michelle Thomas and the business school, to not be afraid to go after things that scare me,” she remarked. “Even if I were to ‘fail,’ I would have Mark Lacker to go to talk about the learnings. I would have Friedman to drop some knowledge on me. I’d have Michelle who would be able to pat me on the back or wipe away some tears if I was crying.”

Esther Ladipo is a partner manager at Facebook, living in Austin, Texas. “I work with medium-sized agencies and I consult with them on Facebook best practices and I help them ensure that their clients are going to be successful,” she explained. “It feels great because a lot of these folks are able to put food on the table practically because of their Facebook advertising, and they’re able to hire more people. I just got off the phone with an agency that has grown 300% over quarantine because they lean heavily on their Facebook ads and their clients were able to hire additional people as well.” b

This story is from:
The Journey - Fall 2020
by Farmer School of Business