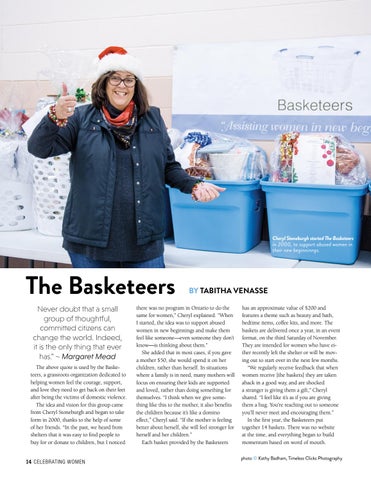 Cheryl Stoneburgh started The Basketeers in 2000, to support abused women in their new beginninngs.

The Basketeers Never doubt that a small group of thoughtful, committed citizens can change the world. Indeed, it is the only thing that ever has.” ~ Margaret Mead The above quote is used by the Basketeers, a grassroots organization dedicated to helping women feel the courage, support, and love they need to get back on their feet after being the victims of domestic violence. The idea and vision for this group came from Cheryl Stoneburgh and began to take form in 2000, thanks to the help of some of her friends. “In the past, we heard from shelters that it was easy to find people to buy for or donate to children, but I noticed 14 CELEBRATING WOMEN

there was no program in Ontario to do the same for women,” Cheryl explained. “When I started, the idea was to support abused women in new beginnings and make them feel like someone—even someone they don’t know—is thinking about them.” She added that in most cases, if you gave a mother $50, she would spend it on her children, rather than herself. In situations where a family is in need, many mothers will focus on ensuring their kids are supported and loved, rather than doing something for themselves. “I think when we give something like this to the mother, it also benefits the children because it’s like a domino effect,” Cheryl said. “If the mother is feeling better about herself, she will feel stronger for herself and her children.” Each basket provided by the Basketeers

has an approximate value of $200 and features a theme such as beauty and bath, bedtime items, coffee kits, and more. The baskets are delivered once a year, in an event format, on the third Saturday of November. They are intended for women who have either recently left the shelter or will be moving out to start over in the next few months. “We regularly receive feedback that when women receive [the baskets] they are taken aback in a good way, and are shocked a stranger is giving them a gift,” Cheryl shared. “I feel like it’s as if you are giving them a hug. You’re reaching out to someone you’ll never meet and encouraging them.” In the first year, the Basketeers put together 14 baskets. There was no website at the time, and everything began to build momentum based on word of mouth. photo © Kathy Badham, Timeless Clicks Photography

This magazine is an example of people connecting for the greater good. Members of our community—volunteers, business owners and supporters—working together to create this publication as a fundraising initiative in support of Family Transition Place. 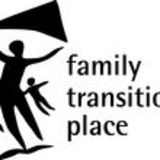