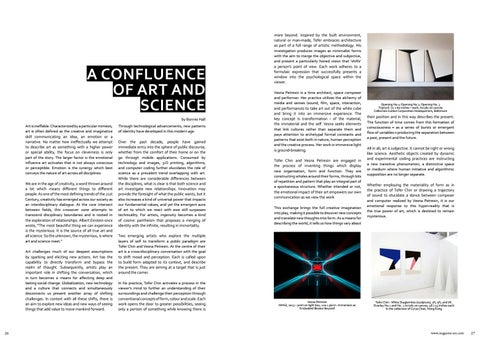 A CONFLUENCE OF ART AND SCIENCE by Bonnie Hall Art is ineffable. Characterized by a particular mimesis, art is often defined as the creative and imaginative skill communicating an idea, an emotion or a narrative. No matter how ineffectually we attempt to describe art as something with a higher power or special ability, the focus on cleverness is only part of the story. The larger factor is the emotional influence art activates that is not always conscious or perceptible. Emotion is the synergy which best conveys the nature of art across all disciplines. We are in the age of creativity, a word thrown around a lot which means different things to different people. As one of the most defining trends of the 21st Century, creativity has emerged across our society as an interdisciplinary dialogue. At the core intersect between fields, this crossover zone attempts to transcend disciplinary boundaries and is rooted in the exploration of relationships. Albert Einstein once wrote, “The most beautiful thing we can experience is the mysterious. It is the source of all true art and all science. So the unknown, the mysterious, is where art and science meet.” Art challenges much of our deepest assumptions by sparking and eliciting new actions. Art has the capability to directly transform and bypass the realm of thought. Subsequently, artists play an important role in shifting the conversation, which in turn becomes a means for affecting deep and lasting social change. Globalization, new technology and a culture that connects and simultaneously disconnects us present another array of shifting challenges. In context with all these shifts, there is an aim to explore new ideas and new ways of seeing things that add value to move mankind forward.

Through technological advancements, new patterns of identity have developed in this modern age. Over the past decade, people have gained immediate entry into the sphere of public discourse, whether from the comfort of their home or on the go through mobile applications. Consumed by technology and images, 3-D printing, algorithms, and computer coding further elucidates the role of science as a prevalent trend overlapping with art. While there are considerable differences between the disciplines, what is clear is that both science and art investigate new relationships. Innovation may provide the foresight of what the public wants, but it also increases a kind of universal power that impacts our fundamental values, and yet the emergent aura of art to which we react with awe still surpasses technicality. For artists, ingenuity becomes a kind of cosmic pantheism that proposes a merging of identity with the infinite, resulting in immortality.

more beyond. Inspired by the built environment, natural or man-made, Tofer embraces architecture as part of a full range of artistic methodology. His investigation produces images as minimalist forms with the aim to merge the objective and subjective, and present a particularly honed vision that ‘shifts’ a person’s point of view. Each work adheres to a formulaic expression that successfully presents a window into the psychological space within the viewer. Vesna Petresin is a time architect, space composer and performer. Her practice utilizes the alchemy of media and senses (sound, film, space, interaction, and performance) to take art out of the white cube and bring it into an immersive experience. The key concept is transformation - of the material, the immaterial and the self. Vesna seeks elements that link cultures rather than separate them and pays attention to archetypal formal constants and patterns that exist both in nature, human perception and the creative process. Her work in immersive light is ground-breaking. Tofer Chin and Vesna Petresin are engaged in the process of inventing things which display new organisation, form and function. They are constructing wholes around their forms, through bits of repetition and pattern that play an integral part of a spontaneous structure. Whether intended or not, the emotional impact of their art empowers our own communication as we view the work. This exchange brings the full creative imagination into play, making it possible to discover new concepts and translate new thoughts into form. As a means for describing the world, it tells us how things vary about

their position and in this way describes the present. The function of time comes from this formation of consciousness – as a series of bursts or emergent flow of variables – producing the separation between a past, present and the future. All in all, art is subjective. It cannot be right or wrong like science. Aesthetic objects created by dynamic and experimental coding practices are instructing a new transitive phenomenon; a distinctive space or medium where human initiative and algorithmic supposition are no longer separate. Whether employing the materiality of form as in the practice of Tofer Chin or drawing a trajectory of sound to elucidate a dance between composer and computer realized by Vesna Petresin, it is our emotional response to this hyper-reality that is the true power of art, which is destined to remain mysterious.

Two emerging artists who explore the multiple layers of self to transform a public paradigm are Tofer Chin and Vesna Petresin. At the centre of their art is a cross-disciplinary conversation with the goal to shift mood and perception. Each is called upon to build form adapted to its context, and describe the present. They are aiming at a target that is just around the corner. In his practice, Tofer Chin activates a process in the viewer’s mind to further an understanding of their surroundings and challenge their perception through conventional concepts of form, colour and scale. Each work opens the door to greater possibilities, seeing only a portion of something while knowing there is

Tofer Chin - White Staglamites (sculpture), 3ft, 5ft, and 7ft. Overlay No.1 and No. 2 Acrylic on canvas, 48 x 34 inches each In the collection of Cyrus Chan, Hong Kong 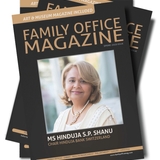