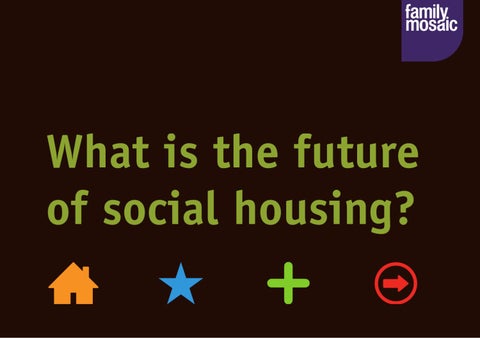 What is the future of social housing?

The survey Over 380 people answered the survey

In June 2011, Family Mosaic invited people to take part in an online survey (www.housingdebate.co.uk). We wanted to try and find out the answer to one key question: what is the future of social housing? The question echoed the discussions weâ&amp;#x20AC;&amp;#x2122;d been having amongst our staff, and at a Board level, about whether our social purpose had to change. We didnâ&amp;#x20AC;&amp;#x2122;t think there was a definitive answer. We knew we had to improve our services to existing tenants, as well as build more homes. We have to continue adding value to our communities, as well as enable our tenants to realise their ambitions. Another way of framing the question was to ask how we should prioritise these strategic objectives. Over 380 people responded to the survey: 20% of them were tenants; about 70% worked in the social housing sector. The remainder included Board members, consultants and private rental sector tenants. 2

We presented the survey respondents with four possible models for housing associations: to be a housing developer, focusing on building more homes; to focus, instead, on being a good landlord, improving the services that are delivered to existing tenants; to build communities, as well as homes â&amp;#x20AC;&amp;#x201C; or, as itâ&amp;#x20AC;&amp;#x2122;s commonly termed, housing plus; to help people to move on from social housing. Then, we asked each respondent to rank these models in order of preference, according to what they believed housing associations should be prioritising.

The most popular choice: be a good landlord (just)

When we look at the preferences made by each audience, we can see some not unsurprising trends: over 40% of tenants wanted us to focus on being a good landlord;

for those in the sector, the most favoured choice was for us to prioritise Housing Plus services;

for the remainder, the most popular first choice was a tie between developing new homes and building communities, with move on in third place.

Most popular for others: build homes, Housing Plus

The least popular choice â&amp;#x20AC;&amp;#x153;Tenants were the most concerned about the prospect of move onâ&amp;#x20AC;?

The least popular choice: Move On

So what do these findings tell us? That people are wary about the prospect of housing associations having to move on their tenants? Yes. That people in the sector feel that they should be doing more than just housing people? Kind of. That people who rent houses from social landlords want them to focus on quality services? Definitely. To find out more, we invited respondents to leave a comment about the future of social housing. Over half of them did.

Build more homes First, there were those who wanted us to focus on building new homes: Building more homes must be your number one priority at this time, as the fewer the homes, the more likely it is that social housing can only provide for the hardcore vulnerable. The demand for housing is continuing to grow: so maximising the supply of affordable new housing is a priority in my view. There are many people in full time work on low income who cannot get social housing because they do not qualify for any benefits and are therefore worse off than the unemployed: therefore more social housing is needed. 14

Be a good landlord Then there were those who wanted us to focus on being a good landlord: You’ve got to get the basics right, providing a service that meets the needs of tenants, such as an efficient and responsive repair service. Your first duty is towards your existing tenants. It’s no good providing housing if it’s a nightmare to live in. If you weren’t a landlord you wouldn’t exist. This is surely your core role.

“Landlord services isn’t an option, it’s your bread and butter, and has to be done.” Get it right and there could be multiple benefits: If you give people with limited financial means a stable home, it creates a sound environment for them to raise families and develop as individuals. It adds social value and reduces the demand on other public services, like health and social services. But don’t try to over-extend youselves: Lordlords should be landlords, not social workers, employment advisers or policers of ASB. These issues are cross-tenure and should be dealt with by other agencies.

Housing plus Doing more than just providing core services was a theme seen in the comments of those who believe we should be playing a Housing Plus role: Social housing providers have the opportunity to shape communities and give incentives to people to take matters into their own hands. There is quantifiable evidence that customers actually benefit from the additional services provided: : as an example, the decrease in rent arrears as a result of welfare rights support is measurable, and it keeps communities together.

achieves pride and ownership: it creates communities and areas where people feel safe and want to live.”

Some commentators, however, disagreed: Stick to what you’re good at: don’t try to be a jack of all trades and master of none. Housing plus is nice, but there are other agencies who can do this in partnership with you. It’s not really core business.

Move on Finally, the issue of move on. This was the focus of the majority of the comments left by respondents. Some expressed support for the idea of fixed tenancies: Too many homes are taken up by people who no longer need them. A tenancy should be renewed based on housing need and the financial situation of the family. I think the attitudes of many residents in social housing need to change: obtaining a property with a subsidised rent should be seen as a privilege, and not a right. Fixed tenancies may help residents on full benefits to appreciate what they have, by time-limiting the support they receive, and thereby forcing some individual responsibility. 20

A home for life has become more difficult to justify. Social housing is more scarce than it’s ever been.

People should be offered the opportunity to live in social housing while their lives improve. Once there has been an improvement in their circumstances, then the property should be offered to those in greater need. Others did not agree with fixed tenancies: If tenants have to leave their homes after some time, they won’t look after it. Flats will be more damaged and it will be extra cost for housing associations. Fixed tenancies are a response to housing shortages, not to the needs of tenants: they need secure, long term housing, so they can meaningfully contribute to their local community. Fixed term tenancies are temporary housing, not permanent homes. Homes need to be let on a secure footing. 21

One suggested the introduction of move on could have a significant impact: There should be a target of, say, moving on 5% of tenants a year, which for many larger housing associations is over 1,000 homes. Some were concerned that the introduction of move on was communicated and handled carefullly: It is vital that customers receive a lot of support during the move on process. There is a culture of fear being created: vulnerable tenants are becoming afraid of losing their housing. And an acknowledgement that move on would not be for everyone: Move-on should be about targetting help, and preparing people so they can better help themselves. It does not work for the most vulnerable, for whom there should be special provision.

“If working and progressing puts my accommodation situation in danger, what should I do? Should I claim benefits and be a drain on society, just so I can keep my home?” Two tenants highlighted the issue of affordability: I am a Family Mosaic resident in London. I work hard to give my children a good example that being on benefits is not a lifestyle choice. I earn a fair wage, but I could not afford to rent in the private sector. Unfortunately, as a single parent on the lower end of the income levels, it is not a case of social housing being affordable, but rather, anything else is unaffordable. Another summed it up: The move-on model presupposes the availability of suitable housing for people to move to: it’s doesn’t exist.

Whatâ&amp;#x20AC;&amp;#x2122;s the future? So what is the future of social housing? The most relevant approach to social housing should be a combination of housing plus and move on, with an emphasis on providing tenants with support to eventually move on from social housing to make way for others in need, whilst recognising that there are some vulnerable tenants who may require long term support and social housing.

We will talk to our partners and decide whatâ&amp;#x20AC;&amp;#x2122;s important to us

At Family Mosaic we realise that we canâ&amp;#x20AC;&amp;#x2122;t prioritise all of these options. In 2012 we will be talking to our partners and deciding what is important to us. Others may reach different conclusions and this may lead to a more diverse sector. That would be something we welcome. We thank all those that have contributed to the debate so far. 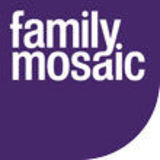