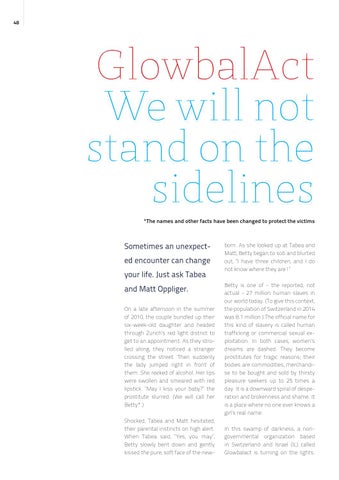 Sometimes an unexpected encounter can change your life. Just ask Tabea and Matt Oppliger. On a late afternoon in the summer of 2010, the couple bundled up their six-week-old daughter and headed through Zurich’s red light district to get to an appointment. As they strolled along, they noticed a stranger crossing the street. Then suddenly the lady jumped right in front of them. She reeked of alcohol. Her lips were swollen and smeared with red lipstick. “May I kiss your baby?” the prostitute slurred. (We will call her Betty*.) Shocked, Tabea and Matt hesitated, their parental instincts on high alert. When Tabea said, “Yes, you may”, Betty slowly bent down and gently kissed the pure, soft face of the new-

born. As she looked up at Tabea and Matt, Betty began to sob and blurted out, “I have three children, and I do not know where they are!” Betty is one of - the reported, not actual - 27 million human slaves in our world today. (To give this context, the population of Switzerland in 2014 was 8.1 million.) The official name for this kind of slavery is called human trafficking or commercial sexual exploitation. In both cases, women’s dreams are dashed. They become prostitutes for tragic reasons; their bodies are commodities, merchandise to be bought and sold by thirsty pleasure seekers up to 25 times a day. It is a downward spiral of desperation and brokenness and shame. It is a place where no one ever knows a girl’s real name. In this swamp of darkness, a nongovernmental organization based in Switzerland and Israel (IL) called Glowbalact is turning on the lights.

A dialogue between entrepreneurial families with a focus value 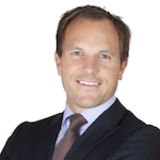