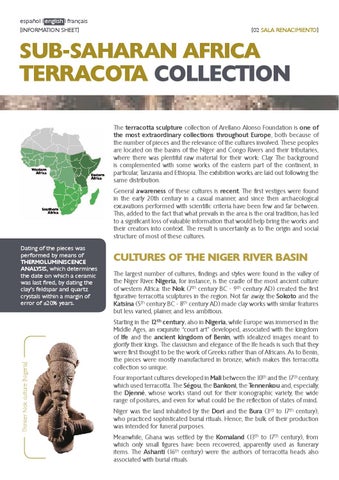 SUB-SAHARAN AFRICA TERRACOTA COLLECTION The terracotta sculpture collection of Arellano Alonso Foundation is one of the most extraordinary collections throughout Europe, both because of the number of pieces and the relevance of the cultures involved. These peoples are located on the basins of the Niger and Congo Rivers and their tributaries, where there was plentiful raw material for their work: Clay. The background is complemented with some works of the eastern part of the continent, in particular, Tanzania and Ethiopia. The exhibition works are laid out following the same distribution. General awareness of these cultures is recent. The first vestiges were found in the early 20th century in a casual manner, and since then archaeological excavations performed with scientific criteria have been few and far between. This, added to the fact that what prevails in the area is the oral tradition, has led to a significant loss of valuable information that would help bring the works and their creators into context. The result is uncertainty as to the origin and social structure of most of these cultures.

Dating of the pieces was performed by means of THERMOLUMINISCENCE ANALYSIS, which determines the date on which a ceramic was last fired, by dating the clay’s feldspar and quartz crystals within a margin of error of ±20% years.

CULTURES OF THE NIGER RIVER BASIN The largest number of cultures, findings and styles were found in the valley of the Niger River. Nigeria, for instance, is the cradle of the most ancient culture of western Africa: the Nok (7th century BC - 9th century AD) created the first figurative terracotta sculptures in the region. Not far away, the Sokoto and the Katsina (5th century BC - 8th century AD) made clay works with similar features but less varied, plainer, and less ambitious. Starting in the 12th century, also in Nigeria, while Europe was immersed in the Middle Ages, an exquisite “court art” developed, associated with the kingdom of Ife and the ancient kingdom of Benin, with idealized images meant to glorify their kings. The classicism and elegance of the Ife heads is such that they were first thought to be the work of Greeks rather than of Africans. As to Benin, the pieces were mostly manufactured in bronze, which makes this terracotta collection so unique. Four important cultures developed in Mali between the 10th and the 17th century, which used terracotta. The Ségou, the Bankoni, the Tennenkou and, especially, the Djenné, whose works stand out for their iconographic variety, the wide range of postures, and even for what could be the reflection of states of mind. Niger was the land inhabited by the Dori and the Bura (3rd to 17th century), who practiced sophisticated burial rituals. Hence, the bulk of their production was intended for funeral purposes. Meanwhile, Ghana was settled by the Komaland (13th to 17th century), from which only small figures have been recovered, apparently used as funerary items. The Ashanti (16th century) were the authors of terracotta heads also associated with burial rituals.

Among the most recent cultures to settle in Nigeria (18th to 19th century) are the Cham/Longuda, with their striking containers for healing rituals: the chandu reveals the patient’s ailment to traditional doctors and the itinate heals the patient. Little is known of the Jukun’s ceramic production, the couple exhibited in the room (community ancestral fathers) being the only one known to date. Nigeria is also home of the Yoruba, the Igbo, the Tiv, and the Mambila. Meanwhile, the Agni (authors of small male heads) occupy territories between Ghana and Ivory Coast; and the Ewe, with their voodoo gods, are disseminated between Togo, Benin, and Ghana.

CULTURES OF THE CONGO RIVER VALLEY In this part of the continent, an interesting rich courtly art developed among peoples who continue to live, for the most part, in today’s Democratic Republic of the Congo. The creations of the kingdom of Luba (16th century), for instance, directly influenced those of their neighbors Chokwe (16th century). These works, associated with power, are also seen among the Bakongo (15th century) (characterized by the expressiveness of their figures), the Azande (16th century), and the Mangbetu (18th century), whose finest productions were created after the start of the 19th century. These terracotta samples combine usefulness and beauty: They are richly decorated anthropomorphic pitchers. The shape of the head –dolichocephalic – reflects the Mangbetu tradition of binding infants’ heads in cloth to deform and elongate their skulls. As adults, the effect is emphasized by wearing their hair high over the head. The skin is also decorated with scarifications and tattoos that cover the face and the body, which is also replicated on the vessels.

INITIATION CEREMONIES mark entrance of a child into adulthood. Confined in the outskirts of the village, the boys learn the myths and traditions of their community, while the girls are instructed on motherhood. A physical challenge (circumcision for boys and excision for girls) closes the learning ritual. The initiates then go home amid mask dances.

EASTERN AFRICA Spread out between the central and eastern area of the continent, other civilizations developed artistic expressions of minor transcendence. In Ethiopia, for example, the Falasha (17th century), known as the “black Jews”, relate their sculpture works to religious beliefs, whereas the figures made by the Paré from Tanzania (19th century), which are used in youth initiation ceremonies, have the peculiarity of being wrapped in a fabric transparent to the body.