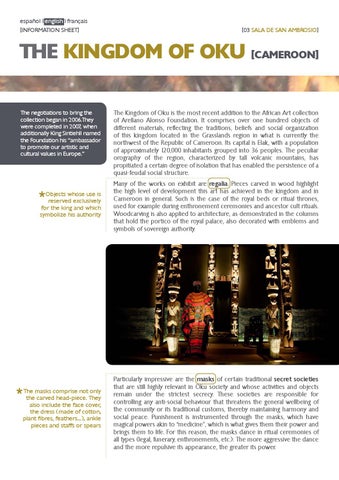 THE KINGDOM OF OKU [CAMEROON] The negotiations to bring the collection began in 2006.They were completed in 2007, when additionally King SintiehII named the Foundation his “ambassador to promote our artistic and cultural values in Europe.”

The masks comprise not only the carved head-piece. They also include the face cover, the dress (made of cotton, plant fibres, feathers...), ankle pieces and staffs or spears

The Kingdom of Oku is the most recent addition to the African Art collection of Arellano Alonso Foundation. It comprises over one hundred objects of different materials, reflecting the traditions, beliefs and social organization of this kingdom located in the Grasslands region in what is currently the northwest of the Republic of Cameroon. Its capital is Elak, with a population of approximately 120,000 inhabitants grouped into 36 peoples. The peculiar orography of the region, characterized by tall volcanic mountains, has propitiated a certain degree of isolation that has enabled the persistence of a quasi-feudal social structure. Many of the works on exhibit are regalia. Pieces carved in wood highlight the high level of development this art has achieved in the kingdom and in Cameroon in general. Such is the case of the royal beds or ritual thrones, used for example during enthronement ceremonies and ancestor cult rituals. Woodcarving is also applied to architecture, as demonstrated in the columns that hold the portico of the royal palace, also decorated with emblems and symbols of sovereign authority.

Particularly impressive are the masks of certain traditional secret societies that are still highly relevant in Oku society and whose activities and objects remain under the strictest secrecy. These societies are responsible for controlling any anti-social behaviour that threatens the general wellbeing of the community or its traditional customs, thereby maintaining harmony and social peace. Punishment is instrumented through the masks, which have magical powers akin to “medicine”, which is what gives them their power and brings them to life. For this reason, the masks dance in ritual ceremonies of all types (legal, funerary, enthronements, etc.): The more aggressive the dance and the more repulsive its appearance, the greater its power.

ORIGIN OF THE MASKS According to legend, a farmer was once forced to watch over his farm at night to keep out marauders intent on stealing his crops. One day it occurred to him to carve several wood statutes instead, which made sounds with the wind and frightened the marauders away. Soon the people began to associate the carved statues with the world of their ancestors and to consider them juju (dangerous medicine).

Lastly, the exhibit features several fetishes and musical instruments, which, as is the case of the above objects, are on display for the first time outside the kingdom of Oku. In Oku, rather than a limited number of gods, new deities can be created whenever diviners assign an unexplainable event to a new divinity. Most gods are associated with historical figures, who in life were protagonists of relevant events or extraordinary feats. In terms of music, it should be kept in mind that beyond mere fun, the instruments also are considered to belong to the category of â&#x20AC;&#x153;dangerous medicineâ&#x20AC;?: magical objects charged with powers through which the secret societies carry out their purpose.