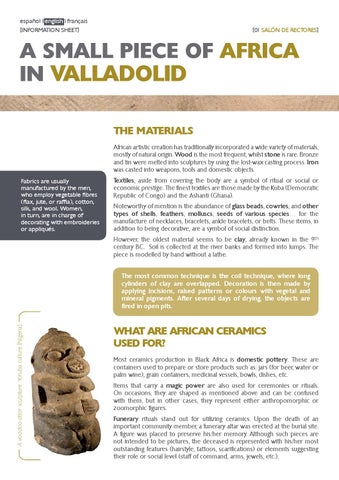 A SMALL PIECE OF AFRICA IN VALLADOLID THE MATERIALS African artistic creation has traditionally incorporated a wide variety of materials, mostly of natural origin. Wood is the most frequent, whilst stone is rare. Bronze and tin were melted into sculptures by using the lost-wax casting process. Iron was casted into weapons, tools and domestic objects. Fabrics are usually manufactured by the men, who employ vegetable fibres (flax, jute, or raffia), cotton, silk, and wool. Women, in turn, are in charge of decorating with embroideries or appliqués.

Textiles, aside from covering the body are a symbol of ritual or social or economic prestige. The finest textiles are those made by the Kuba (Democratic Republic of Congo) and the Ashanti (Ghana). Noteworthy of mention is the abundance of glass beads, cowries, and other types of shells, feathers, molluscs, seeds of various species… for the manufacture of necklaces, bracelets, ankle bracelets, or belts. These items, in addition to being decorative, are a symbol of social distinction. However, the oldest material seems to be clay, already known in the 9th century BC. Soil is collected at the river banks and formed into lumps. The piece is modelled by hand without a lathe.

The most common technique is the coil technique, where long cylinders of clay are overlapped. Decoration is then made by applying incisions, raised patterns or colours with vegetal and mineral pigments. After several days of drying, the objects are fired in open pits.

WHAT ARE AFRICAN CERAMICS USED FOR? Most ceramics production in Black Africa is domestic pottery. These are containers used to prepare or store products such as: jars (for beer, water or palm wine), grain containers, medicinal vessels, bowls, dishes, etc. Items that carry a magic power are also used for ceremonies or rituals. On occasions, they are shaped as mentioned above and can be confused with them, but in other cases, they represent either anthropomorphic or zoomorphic figures. Funerary rituals stand out for utilizing ceramics. Upon the death of an important community member, a funerary altar was erected at the burial site. A figure was placed to preserve his/her memory. Although such pieces are not intended to be pictures, the deceased is represented with his/her most outstanding features (hairstyle, tattoos, scarifications) or elements suggesting their role or social level (staff of command, arms, jewels, etc.).

Figure-shaped sculptures can be further intended for other types of rituals, such as the initiation ritual (which marks the transition of a child into adulthood), the curative, fertility, agrarian (held to keep their harvest safe), fortune telling, and witchcraft ceremonies; or the worshipping of gods and mythical heroes.

THE PARTICULAR CASE OF HORSE RIDERS Horse rider representations are exceptional in African art. Due to insufficient water in the Sub-Saharan zone, malaria and, especially, the bite of the tsetse fly, horse survival is a challenge. Therefore, horses were a symbol of majesty and richness, owned by those holding economic, political, or military power within the community. At the same time, a horse embodied spiritual elevation, as it is suggestive of the victory of the spirit over the senses. These sculptures were apparently modelled to be placed in funerary altars. The resemblance of features between the beast and its rider/the man reflects the symbiosis between both: similar faces, necklaces, scarifications… Hence, the set of six riders exhibited in this room is extraordinary for its oddity and great number as compared to those exhibited in other European collections.

TERRACOTTA ANIMALS One of the most frequent clay themes is animal depiction. Thus, African art embraces a wide range of items, which on occasions are zoomorphic figures or statuettes decorated with animal figures. Such is the case for masks, staff heads, portable sculptures and altars, charms, dress ornaments and useful items such as cups, salt shakers, spoons or stools. Among the most represented animals (although sometimes challenging to identify) are: the antelope, the chameleon, the crocodile, the buffalo, the fish, the elephant, the lion, the giraffe and the dog. But among all, it is the serpent that plays a leading role.

In the majority of cultures the SNAKE is a fertility symbol because of its phallic and sinuous shape (reminiscent of the bends of the river that supports the community). It has also been associated with immortality for its skin-shedding regeneration process. Serpent. Djenné culture [Malí]