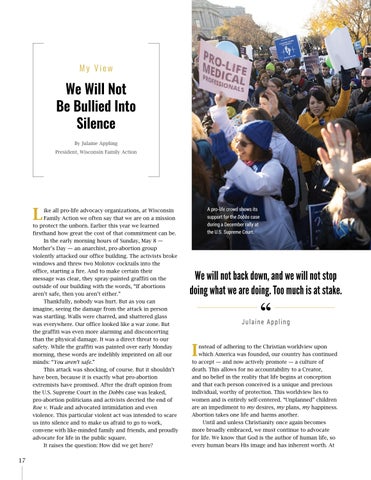 We Will Not Be Bullied Into Silence By Julaine Appling President, Wisconsin Family Action

ike all pro-life advocacy organizations, at Wisconsin Family Action we often say that we are on a mission to protect the unborn. Earlier this year we learned firsthand how great the cost of that commitment can be. In the early morning hours of Sunday, May 8 — Mother’s Day — an anarchist, pro-abortion group violently attacked our office building. The activists broke windows and threw two Molotov cocktails into the office, starting a fire. And to make certain their message was clear, they spray-painted graffiti on the outside of our building with the words, “If abortions aren’t safe, then you aren’t either.” Thankfully, nobody was hurt. But as you can imagine, seeing the damage from the attack in person was startling. Walls were charred, and shattered glass was everywhere. Our office looked like a war zone. But the graffiti was even more alarming and disconcerting than the physical damage. It was a direct threat to our safety. While the graffiti was painted over early Monday morning, these words are indelibly imprinted on all our minds: “You aren’t safe.” This attack was shocking, of course. But it shouldn’t have been, because it is exactly what pro-abortion extremists have promised. After the draft opinion from the U.S. Supreme Court in the Dobbs case was leaked, pro-abortion politicians and activists decried the end of Roe v. Wade and advocated intimidation and even violence. This particular violent act was intended to scare us into silence and to make us afraid to go to work, convene with like-minded family and friends, and proudly advocate for life in the public square. It raises the question: How did we get here?

A pro-life crowd shows its support for the Dobbs case during a December rally at the U.S. Supreme Court.

We will not back down, and we will not stop doing what we are doing. Too much is at stake.

nstead of adhering to the Christian worldview upon which America was founded, our country has continued to accept — and now actively promote — a culture of death. This allows for no accountability to a Creator, and no belief in the reality that life begins at conception and that each person conceived is a unique and precious individual, worthy of protection. This worldview lies to women and is entirely self-centered. “Unplanned” children are an impediment to my desires, my plans, my happiness. Abortion takes one life and harms another. Until and unless Christianity once again becomes more broadly embraced, we must continue to advocate for life. We know that God is the author of human life, so every human bears His image and has inherent worth. At

A Colorado artist looks to the U.S. Supreme Court to defend her right to speak freely 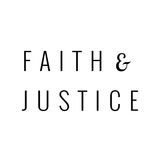