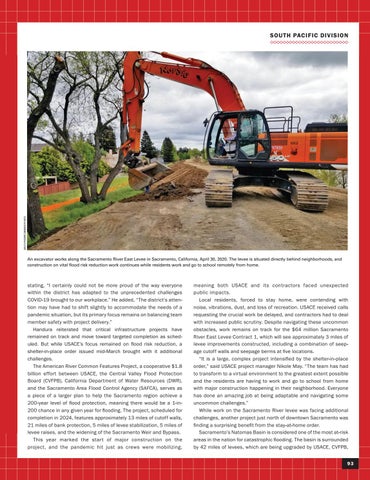 An excavator works along the Sacramento River East Levee in Sacramento, California, April 30, 2020. The levee is situated directly behind neighborhoods, and construction on vital flood risk reduction work continues while residents work and go to school remotely from home.

stating, “I certainly could not be more proud of the way everyone within the district has adapted to the unprecedented challenges COVID-19 brought to our workplace.” He added, “The district’s attention may have had to shift slightly to accommodate the needs of a pandemic situation, but its primary focus remains on balancing team member safety with project delivery.” Handura reiterated that critical infrastructure projects have remained on track and move toward targeted completion as scheduled. But while USACE’s focus remained on flood risk reduction, a shelter-in-place order issued mid-March brought with it additional challenges. The American River Common Features Project, a cooperative $1.8 billion effort between USACE, the Central Valley Flood Protection Board (CVFPB), California Department of Water Resources (DWR), and the Sacramento Area Flood Control Agency (SAFCA), serves as a piece of a larger plan to help the Sacramento region achieve a 200-year level of flood protection, meaning there would be a 1-in200 chance in any given year for flooding. The project, scheduled for completion in 2024, features approximately 13 miles of cutoff walls, 21 miles of bank protection, 5 miles of levee stabilization, 5 miles of levee raises, and the widening of the Sacramento Weir and Bypass. This year marked the start of major construction on the project, and the pandemic hit just as crews were mobilizing,

meaning both USACE and its contractors faced unexpected public impacts. Local residents, forced to stay home, were contending with noise, vibrations, dust, and loss of recreation. USACE received calls requesting the crucial work be delayed, and contractors had to deal with increased public scrutiny. Despite navigating these uncommon obstacles, work remains on track for the $64 million Sacramento River East Levee Contract 1, which will see approximately 3 miles of levee improvements constructed, including a combination of seepage cutoff walls and seepage berms at five locations. “It is a large, complex project intensified by the shelter-in-place order,” said USACE project manager Nikole May. “The team has had to transform to a virtual environment to the greatest extent possible and the residents are having to work and go to school from home with major construction happening in their neighborhood. Everyone has done an amazing job at being adaptable and navigating some uncommon challenges.” While work on the Sacramento River levee was facing additional challenges, another project just north of downtown Sacramento was finding a surprising benefit from the stay-at-home order. Sacramento’s Natomas Basin is considered one of the most at-risk areas in the nation for catastrophic flooding. The basin is surrounded by 42 miles of levees, which are being upgraded by USACE, CVFPB, 93