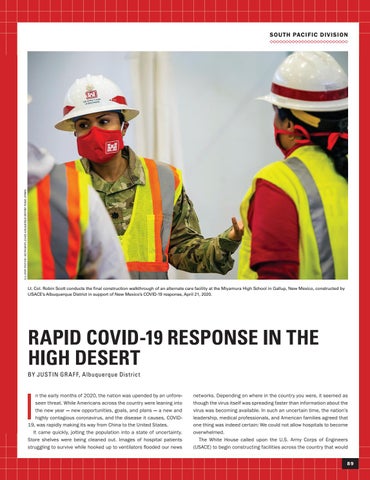 n the early months of 2020, the nation was upended by an unforeseen threat. While Americans across the country were leaning into the new year — new opportunities, goals, and plans — a new and highly contagious coronavirus, and the disease it causes, COVID19, was rapidly making its way from China to the United States. It came quickly, jolting the population into a state of uncertainty. Store shelves were being cleaned out. Images of hospital patients struggling to survive while hooked up to ventilators flooded our news

networks. Depending on where in the country you were, it seemed as though the virus itself was spreading faster than information about the virus was becoming available. In such an uncertain time, the nation’s leadership, medical professionals, and American families agreed that one thing was indeed certain: We could not allow hospitals to become overwhelmed. The White House called upon the U.S. Army Corps of Engineers (USACE) to begin constructing facilities across the country that would 89