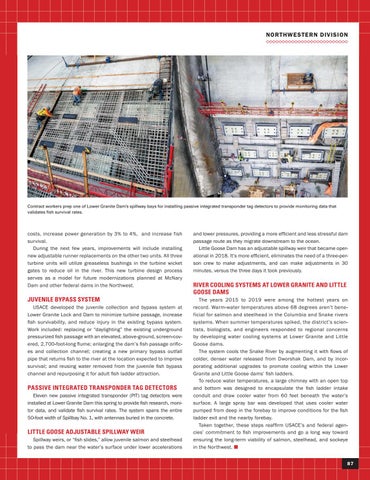 costs, increase power generation by 3% to 4%, and increase fish survival. During the next few years, improvements will include installing new adjustable runner replacements on the other two units. All three turbine units will utilize greaseless bushings in the turbine wicket gates to reduce oil in the river. This new turbine design process serves as a model for future modernizations planned at McNary Dam and other federal dams in the Northwest.

and lower pressures, providing a more efficient and less stressful dam passage route as they migrate downstream to the ocean. Little Goose Dam has an adjustable spillway weir that became operational in 2018. It’s more efficient, eliminates the need of a three-person crew to make adjustments, and can make adjustments in 30 minutes, versus the three days it took previously.

RIVER COOLING SYSTEMS AT LOWER GRANITE AND LITTLE GOOSE DAMS The years 2015 to 2019 were among the hottest years on record. Warm-water temperatures above 68 degrees aren’t beneficial for salmon and steelhead in the Columbia and Snake rivers systems. When summer temperatures spiked, the district’s scientists, biologists, and engineers responded to regional concerns by developing water cooling systems at Lower Granite and Little Goose dams. The system cools the Snake River by augmenting it with flows of colder, denser water released from Dworshak Dam, and by incorporating additional upgrades to promote cooling within the Lower Granite and Little Goose dams’ fish ladders. To reduce water temperatures, a large chimney with an open top and bottom was designed to encapsulate the fish ladder intake conduit and draw cooler water from 60 feet beneath the water’s surface. A large spray bar was developed that uses cooler water pumped from deep in the forebay to improve conditions for the fish ladder exit and the nearby forebay. Taken together, these steps reaffirm USACE’s and federal agencies’ commitment to fish improvements and go a long way toward ensuring the long-term viability of salmon, steelhead, and sockeye in the Northwest. n 87