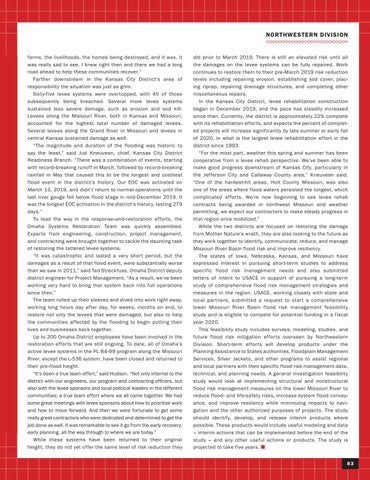 farms, the livelihoods, the homes being destroyed, and it was, it was really sad to see. I knew right then and there we had a long road ahead to help these communities recover.” Farther downstream in the Kansas City District’s area of responsibility the situation was just as grim. Sixty-five levee systems were overtopped, with 45 of those subsequently being breached. Several more levee systems sustained less severe damage, such as erosion and sod kill. Levees along the Missouri River, both in Kansas and Missouri, accounted for the highest total number of damaged levees. Several levees along the Grand River in Missouri and levees in central Kansas sustained damage as well. “The magnitude and duration of the flooding was historic to say the least,” said Jud Kneuvean, chief, Kansas City District Readiness Branch. “There was a combination of events, starting with record-breaking runoff in March, followed by record-breaking rainfall in May that caused this to be the longest and costliest flood event in the district’s history. Our EOC was activated on March 13, 2019, and didn’t return to normal operations until the last river gauge fell below flood stage in mid-December 2019. It was the longest EOC activation in the district’s history, lasting 279 days.” To lead the way in the response-and-restoration efforts, the Omaha Systems Restoration Team was quickly assembled. Experts from engineering, construction, project management, and contracting were brought together to tackle the daunting task of restoring the tattered levee systems. “It was catastrophic and lasted a very short period, but the damages as a result of that flood event, were substantially worse than we saw in 2011,” said Ted Streckfuss, Omaha District deputy district engineer for Project Management. “As a result, we’ve been working very hard to bring that system back into full operations since then.” The team rolled up their sleeves and dived into work right away, working long hours day after day, for weeks, months on end, to restore not only the levees that were damaged, but also to help the communities affected by the flooding to begin putting their lives and businesses back together. Up to 200 Omaha District employees have been involved in the restoration efforts that are still ongoing. To date, all of Omaha’s active levee systems in the PL 84-99 program along the Missouri River, except the L-536 system, have been closed and returned to their pre-flood height. “It’s been a true team effort,” said Hudson. “Not only internal to the district with our engineers, our program and contracting officers, but also with the levee sponsors and local political leaders in the different communities; a true team effort where we all came together. We had some great meetings with levee sponsors about how to prioritize work and how to move forward. And then we were fortunate to get some really great contractors who were dedicated and determined to get the job done as well. It was remarkable to see it go from the early recovery, early planning, all the way through to where we are today.” While these systems have been returned to their original height, they do not yet offer the same level of risk reduction they

did prior to March 2019. There is still an elevated risk until all the damages on the levee systems can be fully repaired. Work continues to restore them to their pre-March 2019 risk reduction levels including repairing erosion, establishing sod cover, placing riprap, repairing drainage structures, and completing other miscellaneous repairs. In the Kansas City District, levee rehabilitation construction began in December 2019, and the pace has steadily increased since then. Currently, the district is approximately 22% complete with its rehabilitation efforts, and expects the percent of completed projects will increase significantly by late summer or early fall of 2020, in what is the largest levee rehabilitation effort in the district since 1993. “For the most part, weather this spring and summer has been cooperative from a levee rehab perspective. We’ve been able to make good progress downstream of Kansas City, particularly in the Jefferson City and Callaway County area,” Kneuvean said. “One of the hardest-hit areas, Holt County Missouri, was also one of the areas where flood waters persisted the longest, which complicated efforts. We’re now beginning to see levee rehab contracts being awarded in northwest Missouri and weather permitting, we expect our contractors to make steady progress in that region once mobilized.” While the two districts are focused on restoring the damage from Mother Nature’s wrath, they are also looking to the future as they work together to identify, communicate, reduce, and manage Missouri River Basin flood risk and improve resiliency. The states of Iowa, Nebraska, Kansas, and Missouri have expressed interest in pursuing short-term studies to address specific flood risk management needs and also submitted letters of intent to USACE in support of pursuing a long-term study of comprehensive flood risk management strategies and measures in the region. USACE, working closely with state and local partners, submitted a request to start a comprehensive lower Missouri River Basin flood risk management feasibility study and is eligible to compete for potential funding in a fiscal year 2020. This feasibility study includes surveys, modeling, studies, and future flood risk mitigation efforts overseen by Northwestern Division. Short-term efforts will develop products under the Planning Assistance to States authorities, Floodplain Management Services, Silver Jackets, and other programs to assist regional and local partners with their specific flood risk management data, technical, and planning needs. A general investigation feasibility study would look at implementing structural and nonstructural flood risk management measures on the lower Missouri River to reduce flood- and life-safety risks, increase system flood conveyance, and improve resiliency while minimizing impacts to navigation and the other authorized purposes of projects. The study should identify, develop, and release interim products where possible. These products would include useful modeling and data – interim actions that can be implemented before the end of the study – and any other useful actions or products. The study is projected to take five years. n 83