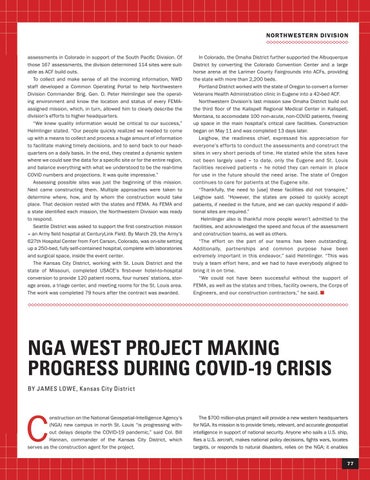 NORTHWESTERN DIVISION assessments in Colorado in support of the South Pacific Division. Of those 167 assessments, the division determined 114 sites were suitable as ACF build outs. To collect and make sense of all the incoming information, NWD staff developed a Common Operating Portal to help Northwestern Division Commander Brig. Gen. D. Peter Helmlinger see the operating environment and know the location and status of every FEMAassigned mission, which, in turn, allowed him to clearly describe the division’s efforts to higher headquarters. “We knew quality information would be critical to our success,” Helmlinger stated. “Our people quickly realized we needed to come up with a means to collect and process a huge amount of information to facilitate making timely decisions, and to send back to our headquarters on a daily basis. In the end, they created a dynamic system where we could see the data for a specific site or for the entire region, and balance everything with what we understood to be the real-time COVID numbers and projections. It was quite impressive.” Assessing possible sites was just the beginning of this mission. Next came constructing them. Multiple approaches were taken to determine where, how, and by whom the construction would take place. That decision rested with the states and FEMA. As FEMA and a state identified each mission, the Northwestern Division was ready to respond. Seattle District was asked to support the first construction mission – an Army field hospital at CenturyLink Field. By March 29, the Army’s 627th Hospital Center from Fort Carson, Colorado, was on-site setting up a 250-bed, fully self-contained hospital, complete with laboratories and surgical space, inside the event center. The Kansas City District, working with St. Louis District and the state of Missouri, completed USACE’s first-ever hotel-to-hospital conversion to provide 120 patient rooms, four nurses’ stations, storage areas, a triage center, and meeting rooms for the St. Louis area. The work was completed 79 hours after the contract was awarded.

In Colorado, the Omaha District further supported the Albuquerque District by converting the Colorado Convention Center and a large horse arena at the Larimer County Fairgrounds into ACFs, providing the state with more than 2,200 beds. Portland District worked with the state of Oregon to convert a former Veterans Health Administration clinic in Eugene into a 42-bed ACF. Northwestern Division’s last mission saw Omaha District build out the third floor of the Kalispell Regional Medical Center in Kalispell, Montana, to accomodate 100 non-acute, non-COVID patients, freeing up space in the main hospital’s critical care facilities. Construction began on May 11 and was completed 13 days later. Leighow, the readiness chief, expressed his appreciation for everyone’s efforts to conduct the assessments and construct the sites in very short periods of time. He stated while the sites have not been largely used – to date, only the Eugene and St. Louis facilities received patients – he noted they can remain in place for use in the future should the need arise. The state of Oregon continues to care for patients at the Eugene site. “Thankfully, the need to [use] these facilities did not transpire,” Leighow said. “However, the states are poised to quickly accept patients, if needed in the future, and we can quickly respond if additional sites are required.” Helmlinger also is thankful more people weren’t admitted to the facilities, and acknowledged the speed and focus of the assessment and construction teams, as well as others. “The effort on the part of our teams has been outstanding. Additionally, partnerships and common purpose have been extremely important in this endeavor,” said Helmlinger. “This was truly a team effort here, and we had to have everybody aligned to bring it in on time. “We could not have been successful without the support of FEMA, as well as the states and tribes, facility owners, the Corps of Engineers, and our construction contractors,” he said. n

onstruction on the National Geospatial-Intelligence Agency’s (NGA) new campus in north St. Louis “is progressing without delays despite the COVID-19 pandemic,” said Col. Bill Hannan, commander of the Kansas City District, which serves as the construction agent for the project.

The $700 million-plus project will provide a new western headquarters for NGA. Its mission is to provide timely, relevant, and accurate geospatial intelligence in support of national security. Anyone who sails a U.S. ship, flies a U.S. aircraft, makes national policy decisions, fights wars, locates targets, or responds to natural disasters, relies on the NGA; it enables 77