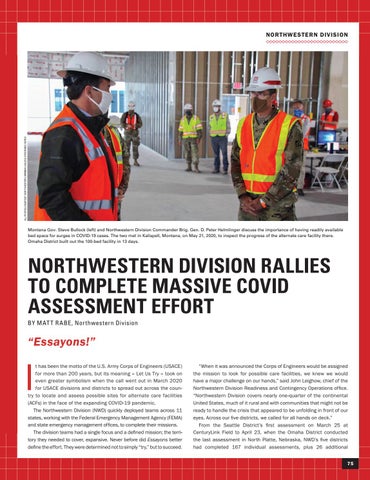 Montana Gov. Steve Bullock (left) and Northwestern Division Commander Brig. Gen. D. Peter Helmlinger discuss the importance of having readily available bed space for surges in COVID-19 cases. The two met in Kalispell, Montana, on May 21, 2020, to inspect the progress of the alternate care facility there. Omaha District built out the 100-bed facility in 13 days.

t has been the motto of the U.S. Army Corps of Engineers (USACE) for more than 200 years, but its meaning – Let Us Try – took on even greater symbolism when the call went out in March 2020 for USACE divisions and districts to spread out across the country to locate and assess possible sites for alternate care facilities (ACFs) in the face of the expanding COVID-19 pandemic. The Northwestern Division (NWD) quickly deployed teams across 11 states, working with the Federal Emergency Management Agency (FEMA) and state emergency management offices, to complete their missions. The division teams had a single focus and a defined mission; the territory they needed to cover, expansive. Never before did Essayons better define the effort. They were determined not to simply “try,” but to succeed.

“When it was announced the Corps of Engineers would be assigned the mission to look for possible care facilities, we knew we would have a major challenge on our hands,” said John Leighow, chief of the Northwestern Division Readiness and Contingency Operations office. “Northwestern Division covers nearly one-quarter of the continental United States, much of it rural and with communities that might not be ready to handle the crisis that appeared to be unfolding in front of our eyes. Across our five districts, we called for all hands on deck.” From the Seattle District’s first assessment on March 25 at CenturyLink Field to April 23, when the Omaha District conducted the last assessment in North Platte, Nebraska, NWD’s five districts had completed 167 individual assessments, plus 26 additional 75