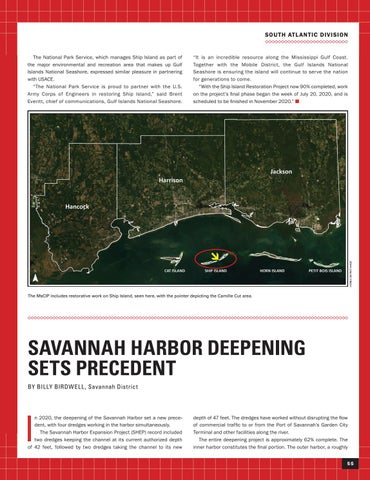 “It is an incredible resource along the Mississippi Gulf Coast. Together with the Mobile District, the Gulf Islands National Seashore is ensuring the island will continue to serve the nation for generations to come. “With the Ship Island Restoration Project now 90% completed, work on the project’s final phase began the week of July 20, 2020, and is scheduled to be finished in November 2020.” n

The National Park Service, which manages Ship Island as part of the major environmental and recreation area that makes up Gulf Islands National Seashore, expressed similar pleasure in partnering with USACE. “The National Park Service is proud to partner with the U.S. Army Corps of Engineers in restoring Ship Island,” said Brent Everitt, chief of communications, Gulf Islands National Seashore.

depth of 47 feet. The dredges have worked without disrupting the flow of commercial traffic to or from the Port of Savannah’s Garden City Terminal and other facilities along the river. The entire deepening project is approximately 62% complete. The inner harbor constitutes the final portion. The outer harbor, a roughly 55