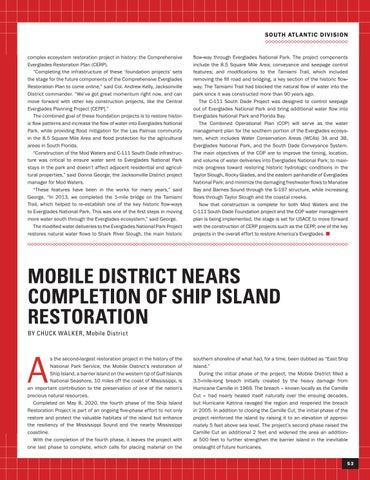 complex ecosystem restoration project in history: the Comprehensive Everglades Restoration Plan (CERP). “Completing the infrastructure of these ‘foundation projects’ sets the stage for the future components of the Comprehensive Everglades Restoration Plan to come online,” said Col. Andrew Kelly, Jacksonville District commander. “We’ve got great momentum right now, and can move forward with other key construction projects, like the Central Everglades Planning Project [CEPP].” The combined goal of these foundation projects is to restore historic flow patterns and increase the flow of water into Everglades National Park, while providing flood mitigation for the Las Palmas community in the 8.5 Square Mile Area and flood protection for the agricultural areas in South Florida. “Construction of the Mod Waters and C-111 South Dade infrastructure was critical to ensure water sent to Everglades National Park stays in the park and doesn’t affect adjacent residential and agricultural properties,” said Donna George, the Jacksonville District project manager for Mod Waters. “These features have been in the works for many years,” said George. “In 2013, we completed the 1-mile bridge on the Tamiami Trail, which helped to re-establish one of the key historic flow-ways to Everglades National Park. This was one of the first steps in moving more water south through the Everglades ecosystem,” said George. The modified water deliveries to the Everglades National Park Project restores natural water flows to Shark River Slough, the main historic

flow-way through Everglades National Park. The project components include the 8.5 Square Mile Area; conveyance and seepage control features; and modifications to the Tamiami Trail, which included removing the fill road and bridging, a key section of the historic flowway. The Tamiami Trail had blocked the natural flow of water into the park since it was constructed more than 90 years ago. The C-111 South Dade Project was designed to control seepage out of Everglades National Park and bring additional water flow into Everglades National Park and Florida Bay. The Combined Operational Plan (COP) will serve as the water management plan for the southern portion of the Everglades ecosystem, which includes Water Conservation Areas (WCAs) 3A and 3B, Everglades National Park, and the South Dade Conveyance System. The main objectives of the COP are to improve the timing, location, and volume of water deliveries into Everglades National Park; to maximize progress toward restoring historic hydrologic conditions in the Taylor Slough, Rocky Glades, and the eastern panhandle of Everglades National Park; and minimize the damaging freshwater flows to Manatee Bay and Barnes Sound through the S-197 structure, while increasing flows through Taylor Slough and the coastal creeks. Now that construction is complete for both Mod Waters and the C-111 South Dade Foundation project and the COP water management plan is being implemented, the stage is set for USACE to move forward with the construction of CERP projects such as the CEPP, one of the key projects in the overall effort to restore America’s Everglades. n

s the second-largest restoration project in the history of the National Park Service, the Mobile District’s restoration of Ship Island, a barrier island on the western tip of Gulf Islands National Seashore, 10 miles off the coast of Mississippi, is an important contribution to the preservation of one of the nation’s precious natural resources. Completed on May 8, 2020, the fourth phase of the Ship Island Restoration Project is part of an ongoing five-phase effort to not only restore and protect the valuable habitats of the island but enhance the resiliency of the Mississippi Sound and the nearby Mississippi coastline. With the completion of the fourth phase, it leaves the project with one last phase to complete, which calls for placing material on the

southern shoreline of what had, for a time, been dubbed as “East Ship Island.” During the initial phase of the project, the Mobile District filled a 3.5-mile-long breach initially created by the heavy damage from Hurricane Camille in 1969. The breach – known locally as the Camille Cut – had nearly healed itself naturally over the ensuing decades, but Hurricane Katrina ravaged the region and reopened the breach in 2005. In addition to closing the Camille Cut, the initial phase of the project reinforced the island by raising it to an elevation of approximately 5 feet above sea level. The project’s second phase raised the Camille Cut an additional 2 feet and widened the area an additional 500 feet to further strengthen the barrier island in the inevitable onslaught of future hurricanes. 53