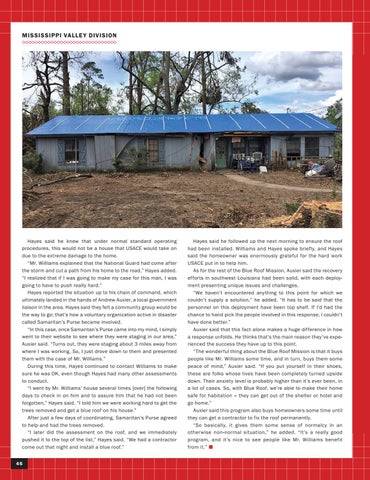 Hayes said he knew that under normal standard operating procedures, this would not be a house that USACE would take on due to the extreme damage to the home. “Mr. Williams explained that the National Guard had come after the storm and cut a path from his home to the road,” Hayes added. “I realized that if I was going to make my case for this man, I was going to have to push really hard.” Hayes reported the situation up to his chain of command, which ultimately landed in the hands of Andrew Auxier, a local government liaison in the area. Hayes said they felt a community group would be the way to go; that’s how a voluntary organization active in disaster called Samaritan’s Purse became involved. “In this case, once Samaritan’s Purse came into my mind, I simply went to their website to see where they were staging in our area,” Auxier said. “Turns out, they were staging about 3 miles away from where I was working. So, I just drove down to them and presented them with the case of Mr. Williams.” During this time, Hayes continued to contact Williams to make sure he was OK, even though Hayes had many other assessments to conduct. “I went by Mr. Williams’ house several times [over] the following days to check in on him and to assure him that he had not been forgotten,” Hayes said. “I told him we were working hard to get the trees removed and get a blue roof on his house.” After just a few days of coordinating, Samaritan’s Purse agreed to help and had the trees removed. “I later did the assessment on the roof, and we immediately pushed it to the top of the list,” Hayes said. “We had a contractor come out that night and install a blue roof.” 46

Hayes said he followed up the next morning to ensure the roof had been installed. Williams and Hayes spoke briefly, and Hayes said the homeowner was enormously grateful for the hard work USACE put in to help him. As for the rest of the Blue Roof Mission, Auxier said the recovery efforts in southwest Louisiana had been solid, with each deployment presenting unique issues and challenges. “We haven’t encountered anything to this point for which we couldn’t supply a solution,” he added. “It has to be said that the personnel on this deployment have been top shelf. If I’d had the chance to hand pick the people involved in this response, I couldn’t have done better.” Auxier said that this fact alone makes a huge difference in how a response unfolds. He thinks that’s the main reason they’ve experienced the success they have up to this point. “The wonderful thing about the Blue Roof Mission is that it buys people like Mr. Williams some time, and in turn, buys them some peace of mind,” Auxier said. “If you put yourself in their shoes, these are folks whose lives have been completely turned upside down. Their anxiety level is probably higher than it’s ever been, in a lot of cases. So, with Blue Roof, we’re able to make their home safe for habitation – they can get out of the shelter or hotel and go home.” Auxier said this program also buys homeowners some time until they can get a contractor to fix the roof permanently. “So basically, it gives them some sense of normalcy in an otherwise non-normal situation,” he added. “It’s a really good program, and it’s nice to see people like Mr. Williams benefit from it.” n