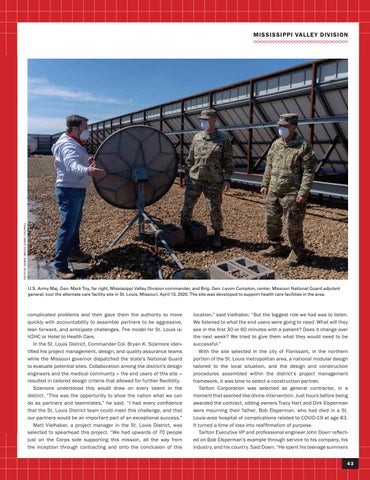 complicated problems and then gave them the authority to move quickly with accountability to assemble partners to be aggressive, lean forward, and anticipate challenges. The model for St. Louis is: H2HC or Hotel to Health Care. In the St. Louis District, Commander Col. Bryan K. Sizemore identified his project management, design, and quality assurance teams while the Missouri governor dispatched the state’s National Guard to evaluate potential sites. Collaboration among the district’s design engineers and the medical community – the end users of this site – resulted in tailored design criteria that allowed for further flexibility. Sizemore understood this would draw on every talent in the district. “This was the opportunity to show the nation what we can do as partners and teammates,” he said. “I had every confidence that the St. Louis District team could meet this challenge, and that our partners would be an important part of an exceptional success.” Matt Vielhaber, a project manager in the St. Louis District, was selected to spearhead this project. “We had upwards of 70 people just on the Corps side supporting this mission, all the way from the inception through contracting and onto the conclusion of this

location,” said Vielhaber. “But the biggest role we had was to listen. We listened to what the end users were going to need. What will they see in the first 30 or 60 minutes with a patient? Does it change over the next week? We tried to give them what they would need to be successful.” With the site selected in the city of Florissant, in the northern portion of the St. Louis metropolitan area, a national modular design tailored to the local situation, and the design and construction procedures assembled within the district’s project management framework, it was time to select a construction partner. Tarlton Corporation was selected as general contractor, in a moment that seemed like divine intervention. Just hours before being awarded the contract, sibling owners Tracy Hart and Dirk Elsperman were mourning their father, Bob Elsperman, who had died in a St. Louis-area hospital of complications related to COVID-19 at age 83. It turned a time of loss into reaffirmation of purpose. Tarlton Executive VP and professional engineer John Doerr reflected on Bob Elsperman’s example through service to his company, his industry, and his country. Said Doerr, “He spent his teenage summers 43