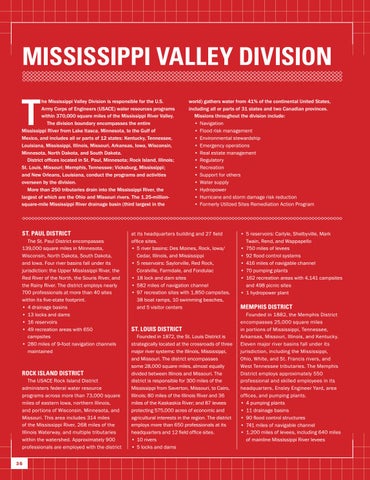 ROCK ISLAND DISTRICT The USACE Rock Island District administers federal water resource programs across more than 73,000 square miles of eastern Iowa, northern Illinois, and portions of Wisconsin, Minnesota, and Missouri. This area includes 314 miles of the Mississippi River, 268 miles of the Illinois Waterway, and multiple tributaries within the watershed. Approximately 900 professionals are employed with the district 36

ST. LOUIS DISTRICT Founded in 1872, the St. Louis District is strategically located at the crossroads of three major river systems: the Illinois, Mississippi, and Missouri. The district encompasses some 28,000 square miles, almost equally divided between Illinois and Missouri. The district is responsible for 300 miles of the Mississippi from Saverton, Missouri, to Cairo, Illinois; 80 miles of the Illinois River and 36 miles of the Kaskaskia River; and 87 levees protecting 575,000 acres of economic and agricultural interests in the region. The district employs more than 650 professionals at its headquarters and 12 field office sites. • 10 rivers • 5 locks and dams