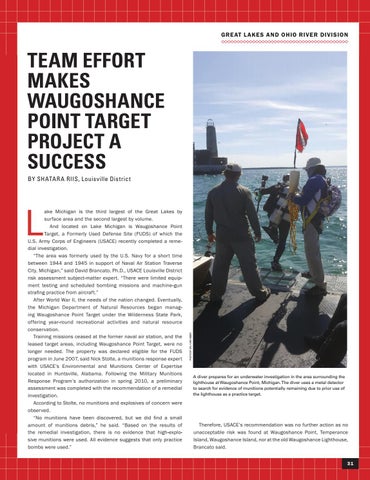 ake Michigan is the third largest of the Great Lakes by surface area and the second largest by volume. And located on Lake Michigan is Waugoshance Point Target, a Formerly Used Defense Site (FUDS) of which the U.S. Army Corps of Engineers (USACE) recently completed a remedial investigation. “The area was formerly used by the U.S. Navy for a short time between 1944 and 1945 in support of Naval Air Station Traverse City, Michigan,” said David Brancato, Ph.D., USACE Louisville District risk assessment subject-matter expert. “There were limited equipment testing and scheduled bombing missions and machine-gun strafing practice from aircraft.” After World War II, the needs of the nation changed. Eventually, the Michigan Department of Natural Resources began managing Waugoshance Point Target under the Wilderness State Park, offering year-round recreational activities and natural resource conservation. Training missions ceased at the former naval air station, and the leased target areas, including Waugoshance Point Target, were no longer needed. The property was declared eligible for the FUDS program in June 2007, said Nick Stolte, a munitions response expert with USACE’s Environmental and Munitions Center of Expertise located in Huntsville, Alabama. Following the Military Munitions Response Program’s authorization in spring 2010, a preliminary assessment was completed with the recommendation of a remedial investigation. According to Stolte, no munitions and explosives of concern were observed. “No munitions have been discovered, but we did find a small amount of munitions debris,” he said. “Based on the results of the remedial investigation, there is no evidence that high-explosive munitions were used. All evidence suggests that only practice bombs were used.”

A diver prepares for an underwater investigation in the area surrounding the lighthouse at Waugoshance Point, Michigan. The diver uses a metal detector to search for evidence of munitions potentially remaining due to prior use of the lighthouse as a practice target.