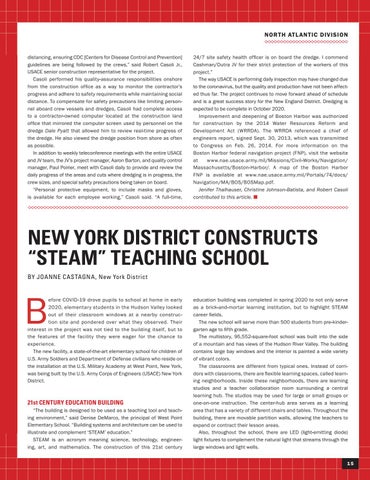 distancing, ensuring CDC [Centers for Disease Control and Prevention] guidelines are being followed by the crews,” said Robert Casoli Jr., USACE senior construction representative for the project. Casoli performed his quality-assurance responsibilities onshore from the construction office as a way to monitor the contractor’s progress and adhere to safety requirements while maintaining social distance. To compensate for safety precautions like limiting personnel aboard crew vessels and dredges, Casoli had complete access to a contractor-owned computer located at the construction land office that mirrored the computer screen used by personnel on the dredge Dale Pyatt that allowed him to review real-time progress of the dredge. He also viewed the dredge position from shore as often as possible. In addition to weekly teleconference meetings with the entire USACE and JV team, the JV’s project manager, Aaron Barton, and quality control manager, Paul Poirier, meet with Casoli daily to provide and review the daily progress of the areas and cuts where dredging is in progress, the crew sizes, and special safety precautions being taken on board. “Personal protective equipment, to include masks and gloves, is available for each employee working,” Casoli said. “A full-time,

24/7 site safety health officer is on board the dredge. I commend Cashman/Dutra JV for their strict protection of the workers of this project.” The way USACE is performing daily inspection may have changed due to the coronavirus, but the quality and production have not been affected thus far. The project continues to move forward ahead of schedule and is a great success story for the New England District. Dredging is expected to be complete in October 2020. Improvement and deepening of Boston Harbor was authorized for construction by the 2014 Water Resources Reform and Development Act (WRRDA). The WRRDA referenced a chief of engineers report, signed Sept. 30, 2013, which was transmitted to Congress on Feb. 26, 2014. For more information on the Boston Harbor federal navigation project (FNP), visit the website at www.nae.usace.army.mil/Missions/Civil-Works/Navigation/ Massachusetts/Boston-Harbor/. A map of the Boston Harbor FNP is available at www.nae.usace.army.mil/Portals/74/docs/ Navigation/MA/BOS/BOSMap.pdf. Jenifer Thalhauser, Christine Johnson-Batista, and Robert Casoli contributed to this article. n

efore COVID-19 drove pupils to school at home in early 2020, elementary students in the Hudson Valley looked out of their classroom windows at a nearby construction site and pondered over what they observed. Their interest in the project was not tied to the building itself, but to the features of the facility they were eager for the chance to experience. The new facility, a state-of-the-art elementary school for children of U.S. Army Soldiers and Department of Defense civilians who reside on the installation at the U.S. Military Academy at West Point, New York, was being built by the U.S. Army Corps of Engineers (USACE) New York District.

21st CENTURY EDUCATION BUILDING “The building is designed to be used as a teaching tool and teaching environment,” said Denise DeMarco, the principal of West Point Elementary School. “Building systems and architecture can be used to illustrate and complement ‘STEAM’ education.” STEAM is an acronym meaning science, technology, engineering, art, and mathematics. The construction of this 21st century

education building was completed in spring 2020 to not only serve as a brick-and-mortar learning institution, but to highlight STEAM career fields. The new school will serve more than 500 students from pre-kindergarten age to fifth grade. The multistory, 95,552-square-foot school was built into the side of a mountain and has views of the Hudson River Valley. The building contains large bay windows and the interior is painted a wide variety of vibrant colors. The classrooms are different from typical ones. Instead of corridors with classrooms, there are flexible learning spaces, called learning neighborhoods. Inside these neighborhoods, there are learning studios and a teacher collaboration room surrounding a central learning hub. The studios may be used for large or small groups or one-on-one instruction. The center-hub area serves as a learning area that has a variety of different chairs and tables. Throughout the building, there are movable partition walls, allowing the teachers to expand or contract their lesson areas. Also, throughout the school, there are LED (light-emitting diode) light fixtures to complement the natural light that streams through the large windows and light wells. 15