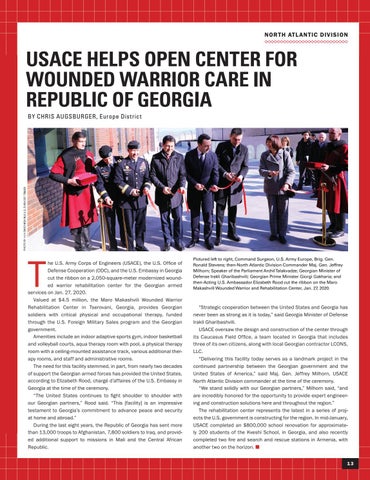 he U.S. Army Corps of Engineers (USACE), the U.S. Office of Defense Cooperation (ODC), and the U.S. Embassy in Georgia cut the ribbon on a 2,050-square-meter modernized wounded warrior rehabilitation center for the Georgian armed services on Jan. 27, 2020. Valued at $4.5 million, the Maro Makashvili Wounded Warrior Rehabilitation Center in Tserovani, Georgia, provides Georgian soldiers with critical physical and occupational therapy, funded through the U.S. Foreign Military Sales program and the Georgian government. Amenities include an indoor adaptive sports gym, indoor basketball and volleyball courts, aqua therapy room with pool, a physical therapy room with a ceiling-mounted assistance track, various additional therapy rooms, and staff and administrative rooms. The need for this facility stemmed, in part, from nearly two decades of support the Georgian armed forces has provided the United States, according to Elizabeth Rood, chargé d’affaires of the U.S. Embassy in Georgia at the time of the ceremony. “The United States continues to fight shoulder to shoulder with our Georgian partners,” Rood said. “This [facility] is an impressive testament to Georgia’s commitment to advance peace and security at home and abroad.” During the last eight years, the Republic of Georgia has sent more than 13,000 troops to Afghanistan, 7,800 soldiers to Iraq, and provided additional support to missions in Mali and the Central African Republic.

“Strategic cooperation between the United States and Georgia has never been as strong as it is today,” said Georgia Minister of Defense Irakli Gharibashvili. USACE oversaw the design and construction of the center through its Caucasus Field Office, a team located in Georgia that includes three of its own citizens, along with local Georgian contractor LCONS, LLC. “Delivering this facility today serves as a landmark project in the continued partnership between the Georgian government and the United States of America,” said Maj. Gen. Jeffrey Milhorn, USACE North Atlantic Division commander at the time of the ceremony. “We stand solidly with our Georgian partners,” Milhorn said, “and are incredibly honored for the opportunity to provide expert engineering and construction solutions here and throughout the region.” The rehabilitation center represents the latest in a series of projects the U.S. government is constructing for the region. In mid-January, USACE completed an $800,000 school renovation for approximately 200 students of the Kveshi School, in Georgia, and also recently completed two fire and search and rescue stations in Armenia, with another two on the horizon. n 13