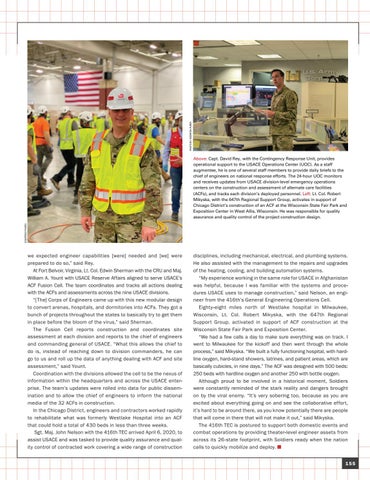 Above: Capt. David Rey, with the Contingency Response Unit, provides operational support to the USACE Operations Center (UOC). As a staff augmentee, he is one of several staff members to provide daily briefs to the chief of engineers on national response efforts. The 24-hour UOC monitors and receives updates from USACE division-level emergency operations centers on the construction and assessment of alternate care facilities (ACFs), and tracks each division’s deployed personnel. Left: Lt. Col. Robert Mikyska, with the 647th Regional Support Group, activates in support of Chicago District’s construction of an ACF at the Wisconsin State Fair Park and Exposition Center in West Allis, Wisconsin. He was responsible for quality assurance and quality control of the project construction design.

we expected engineer capabilities [were] needed and [we] were prepared to do so,” said Rey. At Fort Belvoir, Virginia, Lt. Col. Edwin Sherman with the CRU and Maj. William A. Yount with USACE Reserve Affairs aligned to serve USACE’s ACF Fusion Cell. The team coordinates and tracks all actions dealing with the ACFs and assessments across the nine USACE divisions. “[The] Corps of Engineers came up with this new modular design to convert arenas, hospitals, and dormitories into ACFs. They got a bunch of projects throughout the states to basically try to get them in place before the bloom of the virus,” said Sherman. The Fusion Cell reports construction and coordinates site assessment at each division and reports to the chief of engineers and commanding general of USACE. “What this allows the chief to do is, instead of reaching down to division commanders, he can go to us and roll up the data of anything dealing with ACF and site assessment,” said Yount. Coordination with the divisions allowed the cell to be the nexus of information within the headquarters and across the USACE enterprise. The team’s updates were rolled into data for public dissemination and to allow the chief of engineers to inform the national media of the 32 ACFs in construction. In the Chicago District, engineers and contractors worked rapidly to rehabilitate what was formerly Westlake Hospital into an ACF that could hold a total of 430 beds in less than three weeks. Sgt. Maj. John Nelson with the 416th TEC arrived April 6, 2020, to assist USACE and was tasked to provide quality assurance and quality control of contracted work covering a wide range of construction

disciplines, including mechanical, electrical, and plumbing systems. He also assisted with the management to the repairs and upgrades of the heating, cooling, and building automation systems. “My experience working in the same role for USACE in Afghanistan was helpful, because I was familiar with the systems and procedures USACE uses to manage construction,” said Nelson, an engineer from the 416th’s General Engineering Operations Cell. Eighty-eight miles north of Westlake hospital in Milwaukee, Wisconsin, Lt. Col. Robert Mikyska, with the 647th Regional Support Group, activated in support of ACF construction at the Wisconsin State Fair Park and Exposition Center. “We had a few calls a day to make sure everything was on track. I went to Milwaukee for the kickoff and then went through the whole process,” said Mikyska. “We built a fully functioning hospital, with hardline oxygen, hard-stand showers, latrines, and patient areas, which are basically cubicles, in nine days.” The ACF was designed with 500 beds: 250 beds with hardline oxygen and another 250 with bottle oxygen. Although proud to be involved in a historical moment, Soldiers were constantly reminded of the stark reality and dangers brought on by the viral enemy. “It’s very sobering too, because as you are excited about everything going on and see the collaborative effort, it’s hard to be around there, as you know potentially there are people that will come in there that will not make it out,” said Mikyska. The 416th TEC is postured to support both domestic events and combat operations by providing theater-level engineer assets from across its 26-state footprint, with Soldiers ready when the nation calls to quickly mobilize and deploy. n 155