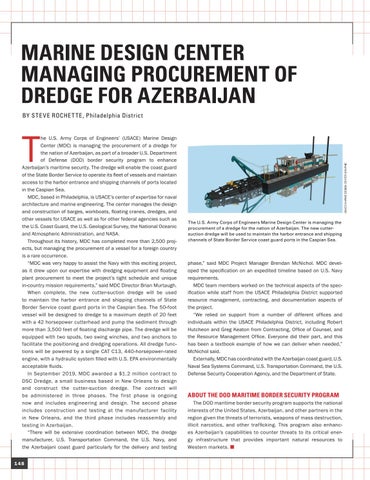 he U.S. Army Corps of Engineers’ (USACE) Marine Design Center (MDC) is managing the procurement of a dredge for the nation of Azerbaijan, as part of a broader U.S. Department of Defense (DOD) border security program to enhance Azerbaijan’s maritime security. The dredge will enable the coast guard of the State Border Service to operate its fleet of vessels and maintain access to the harbor entrance and shipping channels of ports located in the Caspian Sea. MDC, based in Philadelphia, is USACE’s center of expertise for naval architecture and marine engineering. The center manages the design and construction of barges, workboats, floating cranes, dredges, and other vessels for USACE as well as for other federal agencies such as the U.S. Coast Guard, the U.S. Geological Survey, the National Oceanic and Atmospheric Administration, and NASA. Throughout its history, MDC has completed more than 2,500 projects, but managing the procurement of a vessel for a foreign country is a rare occurrence. “MDC was very happy to assist the Navy with this exciting project, as it drew upon our expertise with dredging equipment and floating plant procurement to meet the project’s tight schedule and unique in-country mission requirements,” said MDC Director Brian Murtaugh. When complete, the new cutter-suction dredge will be used to maintain the harbor entrance and shipping channels of State Border Service coast guard ports in the Caspian Sea. The 50-foot vessel will be designed to dredge to a maximum depth of 20 feet with a 42 horsepower cutterhead and pump the sediment through more than 3,500 feet of floating discharge pipe. The dredge will be equipped with two spuds, two swing winches, and two anchors to facilitate the positioning and dredging operations. All dredge functions will be powered by a single CAT C13, 440-horsepower-rated engine, with a hydraulic system filled with U.S. EPA environmentally acceptable fluids. In September 2019, MDC awarded a $1.2 million contract to DSC Dredge, a small business based in New Orleans to design and construct the cutter-suction dredge. The contract will be administered in three phases. The first phase is ongoing now and includes engineering and design. The second phase includes construction and testing at the manufacturer facility in New Orleans, and the third phase includes reassembly and testing in Azerbaijan. “There will be extensive coordination between MDC, the dredge manufacturer, U.S. Transportation Command, the U.S. Navy, and the Azerbaijani coast guard particularly for the delivery and testing

The U.S. Army Corps of Engineers Marine Design Center is managing the procurement of a dredge for the nation of Azerbaijan. The new cuttersuction dredge will be used to maintain the harbor entrance and shipping channels of State Border Service coast guard ports in the Caspian Sea.

phase,” said MDC Project Manager Brendan McNichol. MDC developed the specification on an expedited timeline based on U.S. Navy requirements. MDC team members worked on the technical aspects of the specification while staff from the USACE Philadelphia District supported resource management, contracting, and documentation aspects of the project. “We relied on support from a number of different offices and individuals within the USACE Philadelphia District, including Robert Hutcheon and Greg Keaton from Contracting, Office of Counsel, and the Resource Management Office. Everyone did their part, and this has been a textbook example of how we can deliver when needed,” McNichol said. Externally, MDC has coordinated with the Azerbaijan coast guard, U.S. Naval Sea Systems Command, U.S. Transportation Command, the U.S. Defense Security Cooperation Agency, and the Department of State.

ABOUT THE DOD MARITIME BORDER SECURITY PROGRAM The DOD maritime border security program supports the national interests of the United States, Azerbaijan, and other partners in the region given the threats of terrorists, weapons of mass destruction, illicit narcotics, and other trafficking. This program also enhances Azerbaijan’s capabilities to counter threats to its critical energy infrastructure that provides important natural resources to Western markets. n