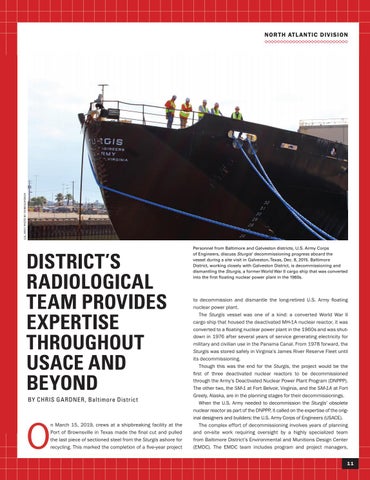 n March 15, 2019, crews at a shipbreaking facility at the Port of Brownsville in Texas made the final cut and pulled the last piece of sectioned steel from the Sturgis ashore for recycling. This marked the completion of a five-year project

Personnel from Baltimore and Galveston districts, U.S. Army Corps of Engineers, discuss Sturgis’ decommissioning progress aboard the vessel during a site visit in Galveston, Texas, Dec. 8, 2015. Baltimore District, working closely with Galveston District, is decommissioning and dismantling the Sturgis, a former World War II cargo ship that was converted into the first floating nuclear power plant in the 1960s.

to decommission and dismantle the long-retired U.S. Army floating nuclear power plant. The Sturgis vessel was one of a kind: a converted World War II cargo ship that housed the deactivated MH-1A nuclear reactor, it was converted to a floating nuclear power plant in the 1960s and was shutdown in 1976 after several years of service generating electricity for military and civilian use in the Panama Canal. From 1978 forward, the Sturgis was stored safely in Virginia’s James River Reserve Fleet until its decommissioning. Though this was the end for the Sturgis, the project would be the first of three deactivated nuclear reactors to be decommissioned through the Army’s Deactivated Nuclear Power Plant Program (DNPPP). The other two, the SM-1 at Fort Belvoir, Virginia, and the SM-1A at Fort Greely, Alaska, are in the planning stages for their decommissionings. When the U.S. Army needed to decommission the Sturgis’ obsolete nuclear reactor as part of the DNPPP, it called on the expertise of the original designers and builders: the U.S. Army Corps of Engineers (USACE). The complex effort of decommissioning involves years of planning and on-site work requiring oversight by a highly specialized team from Baltimore District’s Environmental and Munitions Design Center (EMDC). The EMDC team includes program and project managers, 11