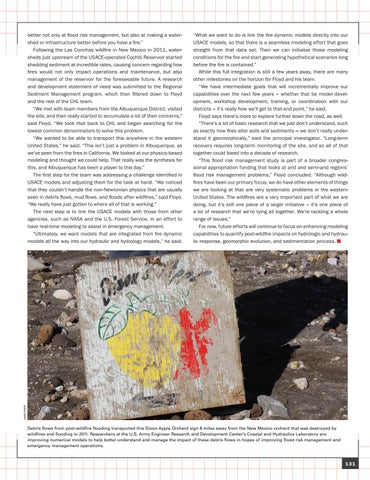 “What we want to do is link the fire dynamic models directly into our USACE models, so that there is a seamless modeling effort that goes straight from that data set. Then we can initialize those modeling conditions for the fire and start generating hypothetical scenarios long before the fire is contained.” While this full integration is still a few years away, there are many other milestones on the horizon for Floyd and his team. “We have intermediate goals that will incrementally improve our capabilities over the next few years – whether that be model development, workshop development, training, or coordination with our districts – it’s really how we’ll get to that end point,” he said. Floyd says there’s more to explore further down the road, as well. “There’s a lot of basic research that we just don’t understand, such as exactly how fires alter soils and sediments — we don’t really understand it geomorphically,” said the principal investigator. “Long-term recovery requires long-term monitoring of the site, and so all of that together could bleed into a decade of research. “This flood risk management study is part of a broader congressional appropriation funding that looks at arid and semi-arid regions’ flood risk management problems,” Floyd concluded. “Although wildfires have been our primary focus, we do have other elements of things we are looking at that are very systematic problems in the western United States. The wildfires are a very important part of what we are doing, but it’s still one piece of a larger initiative – it’s one piece of a lot of research that we’re tying all together. We’re tackling a whole range of issues.” For now, future efforts will continue to focus on enhancing modeling capabilities to quantify post-wildfire impacts on hydrologic and hydraulic response, geomorphic evolution, and sedimentation process. n

better not only at flood risk management, but also at making a watershed or infrastructure better before you have a fire.” Following the Las Conchas wildfire in New Mexico in 2011, watersheds just upstream of the USACE-operated Cochiti Reservoir started shedding sediment at incredible rates, causing concern regarding how fires would not only impact operations and maintenance, but also management of the reservoir for the foreseeable future. A research and development statement of need was submitted to the Regional Sediment Management program, which then filtered down to Floyd and the rest of the CHL team. “We met with team members from the Albuquerque District, visited the site, and then really started to accumulate a lot of their concerns,” said Floyd. “We took that back to CHL and began searching for the lowest common denominators to solve this problem. “We wanted to be able to transport this anywhere in the western United States,” he said. “This isn’t just a problem in Albuquerque, as we’ve seen from the fires in California. We looked at our physics-based modeling and thought we could help. That really was the synthesis for this, and Albuquerque has been a player to this day.” The first step for the team was addressing a challenge identified in USACE models and adjusting them for the task at hand. “We noticed that they couldn’t handle the non-Newtonian physics that are usually seen in debris flows, mud flows, and floods after wildfires,” said Floyd. “We really have just gotten to where all of that is working.” The next step is to link the USACE models with those from other agencies, such as NASA and the U.S. Forest Service, in an effort to have real-time modeling to assist in emergency management. “Ultimately, we want models that are integrated from fire dynamic models all the way into our hydraulic and hydrology models,” he said.

Debris flows from post-wildfire flooding transported this Dixon Apple Orchard sign 8 miles away from the New Mexico orchard that was destroyed by wildfires and flooding in 2011. Researchers at the U.S. Army Engineer Research and Development Center’s Coastal and Hydraulics Laboratory are improving numerical models to help better understand and manage the impact of these debris flows in hopes of improving flood risk management and emergency management operations.