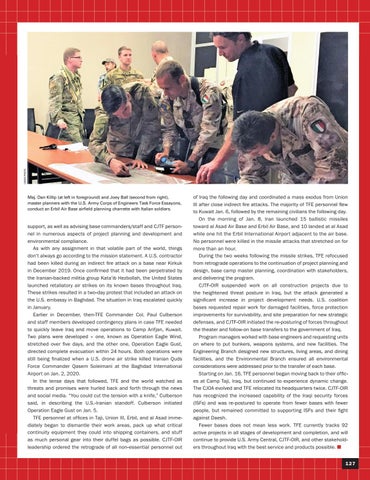 support, as well as advising base commanders/staff and CJTF personnel in numerous aspects of project planning and development and environmental compliance. As with any assignment in that volatile part of the world, things don’t always go according to the mission statement. A U.S. contractor had been killed during an indirect fire attack on a base near Kirkuk in December 2019. Once confirmed that it had been perpetrated by the Iranian-backed militia group Kata’ib Hezbollah, the United States launched retaliatory air strikes on its known bases throughout Iraq. These strikes resulted in a two-day protest that included an attack on the U.S. embassy in Baghdad. The situation in Iraq escalated quickly in January. Earlier in December, then-TFE Commander Col. Paul Culberson and staff members developed contingency plans in case TFE needed to quickly leave Iraq and move operations to Camp Arifjan, Kuwait. Two plans were developed – one, known as Operation Eagle Wind, stretched over five days, and the other one, Operation Eagle Gust, directed complete evacuation within 24 hours. Both operations were still being finalized when a U.S. drone air strike killed Iranian Quds Force Commander Qasem Soleimani at the Baghdad International Airport on Jan. 2, 2020. In the tense days that followed, TFE and the world watched as threats and promises were hurled back and forth through the news and social media. “You could cut the tension with a knife,” Culberson said, in describing the U.S.-Iranian standoff. Culberson initiated Operation Eagle Gust on Jan. 5. TFE personnel at offices in Taji, Union III, Erbil, and al Asad immediately began to dismantle their work areas, pack up what critical continuity equipment they could into shipping containers, and stuff as much personal gear into their duffel bags as possible. CJTF-OIR leadership ordered the retrograde of all non-essential personnel out

of Iraq the following day and coordinated a mass exodus from Union III after close indirect fire attacks. The majority of TFE personnel flew to Kuwait Jan. 6, followed by the remaining civilians the following day. On the morning of Jan. 8, Iran launched 15 ballistic missiles toward al Asad Air Base and Erbil Air Base, and 10 landed at al Asad while one hit the Erbil International Airport adjacent to the air base. No personnel were killed in the missile attacks that stretched on for more than an hour. During the two weeks following the missile strikes, TFE refocused from retrograde operations to the continuation of project planning and design, base camp master planning, coordination with stakeholders, and delivering the program. CJTF-OIR suspended work on all construction projects due to the heightened threat posture in Iraq, but the attack generated a significant increase in project development needs. U.S. coalition bases requested repair work for damaged facilities, force protection improvements for survivability, and site preparation for new strategic defenses, and CJTF-OIR initiated the re-posturing of forces throughout the theater and follow-on base transfers to the government of Iraq. Program managers worked with base engineers and requesting units on where to put bunkers, weapons systems, and new facilities. The Engineering Branch designed new structures, living areas, and dining facilities, and the Environmental Branch ensured all environmental considerations were addressed prior to the transfer of each base. Starting on Jan. 16, TFE personnel began moving back to their offices at Camp Taji, Iraq, but continued to experience dynamic change. The CJOA evolved and TFE relocated its headquarters twice. CJTF-OIR has recognized the increased capability of the Iraqi security forces (ISFs) and was re-postured to operate from fewer bases with fewer people, but remained committed to supporting ISFs and their fight against Daesh. Fewer bases does not mean less work. TFE currently tracks 92 active projects in all stages of development and completion, and will continue to provide U.S. Army Central, CJTF-OIR, and other stakeholders throughout Iraq with the best service and products possible. n 1 27