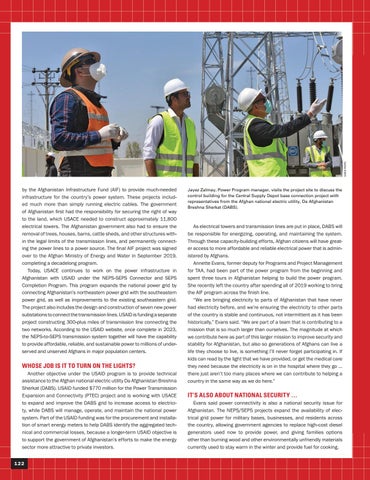 by the Afghanistan Infrastructure Fund (AIF) to provide much-needed infrastructure for the country’s power system. These projects included much more than simply running electric cables. The government of Afghanistan first had the responsibility for securing the right of way to the land, which USACE needed to construct approximately 11,800 electrical towers. The Afghanistan government also had to ensure the removal of trees, houses, barns, cattle sheds, and other structures within the legal limits of the transmission lines, and permanently connecting the power lines to a power source. The final AIF project was signed over to the Afghan Ministry of Energy and Water in September 2019, completing a decadelong program. Today, USACE continues to work on the power infrastructure in Afghanistan with USAID under the NEPS-SEPS Connector and SEPS Completion Program. This program expands the national power grid by connecting Afghanistan’s northeastern power grid with the southeastern power grid, as well as improvements to the existing southeastern grid. The project also includes the design and construction of seven new power substations to connect the transmission lines. USAID is funding a separate project constructing 300-plus miles of transmission line connecting the two networks. According to the USAID website, once complete in 2023, the NEPS-to-SEPS transmission system together will have the capability to provide affordable, reliable, and sustainable power to millions of underserved and unserved Afghans in major population centers.

WHOSE JOB IS IT TO TURN ON THE LIGHTS? Another objective under the USAID program is to provide technical assistance to the Afghan national electric utility Da Afghanistan Breshna Sherkat (DABS). USAID funded $770 million for the Power Transmission Expansion and Connectivity (PTEC) project and is working with USACE to expand and improve the DABS grid to increase access to electricity, while DABS will manage, operate, and maintain the national power system. Part of the USAID funding was for the procurement and installation of smart energy meters to help DABS identify the aggregated technical and commercial losses, because a longer-term USAID objective is to support the government of Afghanistan’s efforts to make the energy sector more attractive to private investors. 122

As electrical towers and transmission lines are put in place, DABS will be responsible for energizing, operating, and maintaining the system. Through these capacity-building efforts, Afghan citizens will have greater access to more affordable and reliable electrical power that is administered by Afghans. Annette Evans, former deputy for Programs and Project Management for TAA, had been part of the power program from the beginning and spent three tours in Afghanistan helping to build the power program. She recently left the country after spending all of 2019 working to bring the AIF program across the finish line. “We are bringing electricity to parts of Afghanistan that have never had electricity before, and we’re ensuring the electricity to other parts of the country is stable and continuous, not intermittent as it has been historically,” Evans said. “We are part of a team that is contributing to a mission that is so much larger than ourselves. The magnitude at which we contribute here as part of this larger mission to improve security and stability for Afghanistan, but also so generations of Afghans can live a life they choose to live, is something I’ll never forget participating in. If kids can read by the light that we have provided, or get the medical care they need because the electricity is on in the hospital where they go … there just aren’t too many places where we can contribute to helping a country in the same way as we do here.”

IT’S ALSO ABOUT NATIONAL SECURITY … Evans said power connectivity is also a national security issue for Afghanistan. The NEPS/SEPS projects expand the availability of electrical grid power for military bases, businesses, and residents across the country, allowing government agencies to replace high-cost diesel generators used now to provide power, and giving families options other than burning wood and other environmentally unfriendly materials currently used to stay warm in the winter and provide fuel for cooking.