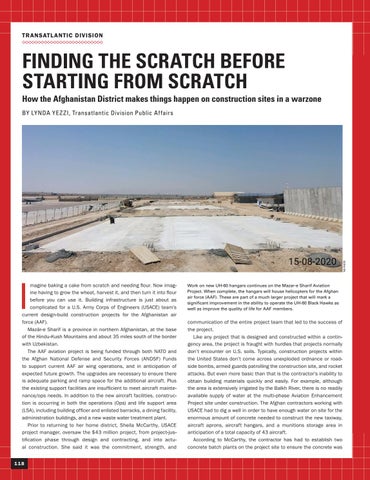 magine baking a cake from scratch and needing flour. Now imagine having to grow the wheat, harvest it, and then turn it into flour before you can use it. Building infrastructure is just about as complicated for a U.S. Army Corps of Engineers (USACE) team’s current design-build construction projects for the Afghanistan air force (AAF). Mazār-e Sharīf is a province in northern Afghanistan, at the base of the Hindu-Kush Mountains and about 35 miles south of the border with Uzbekistan. The AAF aviation project is being funded through both NATO and the Afghan National Defense and Security Forces (ANDSF) Funds to support current AAF air wing operations, and in anticipation of expected future growth. The upgrades are necessary to ensure there is adequate parking and ramp space for the additional aircraft. Plus the existing support facilities are insufficient to meet aircraft maintenance/ops needs. In addition to the new aircraft facilities, construction is occurring in both the operations (Ops) and life support area (LSA), including building officer and enlisted barracks, a dining facility, administration buildings, and a new waste water treatment plant. Prior to returning to her home district, Sheila McCarthy, USACE project manager, oversaw the $43 million project, from project-justification phase through design and contracting, and into actual construction. She said it was the commitment, strength, and

Work on new UH-60 hangars continues on the Mazar-e Sharif Aviation Project. When complete, the hangars will house helicopters for the Afghan air force (AAF). These are part of a much larger project that will mark a significant improvement in the ability to operate the UH-60 Black Hawks as well as improve the quality of life for AAF members.

communication of the entire project team that led to the success of the project. Like any project that is designed and constructed within a contingency area, the project is fraught with hurdles that projects normally don’t encounter on U.S. soils. Typically, construction projects within the United States don’t come across unexploded ordnance or roadside bombs, armed guards patrolling the construction site, and rocket attacks. But even more basic than that is the contractor’s inability to obtain building materials quickly and easily. For example, although the area is extensively irrigated by the Balkh River, there is no readily available supply of water at the multi-phase Aviation Enhancement Project site under construction. The Afghan contractors working with USACE had to dig a well in order to have enough water on site for the enormous amount of concrete needed to construct the new taxiway, aircraft aprons, aircraft hangars, and a munitions storage area in anticipation of a total capacity of 43 aircraft. According to McCarthy, the contractor has had to establish two concrete batch plants on the project site to ensure the concrete was