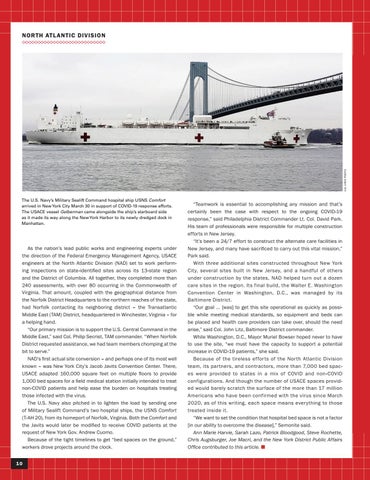 The U.S. Navy’s Military Sealift Command hospital ship USNS Comfort arrived in New York City March 30 in support of COVID-19 response efforts. The USACE vessel Gelberman came alongside the ship’s starboard side as it made its way along the New York Harbor to its newly dredged dock in Manhattan.

As the nation’s lead public works and engineering experts under the direction of the Federal Emergency Management Agency, USACE engineers at the North Atlantic Division (NAD) set to work performing inspections on state-identified sites across its 13-state region and the District of Columbia. All together, they completed more than 240 assessments, with over 80 occurring in the Commonwealth of Virginia. That amount, coupled with the geographical distance from the Norfolk District Headquarters to the northern reaches of the state, had Norfolk contacting its neighboring district – the Transatlantic Middle East (TAM) District, headquartered in Winchester, Virginia – for a helping hand. “Our primary mission is to support the U.S. Central Command in the Middle East,” said Col. Philip Secrist, TAM commander. “When Norfolk District requested assistance, we had team members chomping at the bit to serve.” NAD’s first actual site conversion – and perhaps one of its most well known – was New York City’s Jacob Javits Convention Center. There, USACE adapted 160,000 square feet on multiple floors to provide 1,000 bed spaces for a field medical station initially intended to treat non-COVID patients and help ease the burden on hospitals treating those infected with the virus. The U.S. Navy also pitched in to lighten the load by sending one of Military Sealift Command’s two hospital ships, the USNS Comfort (T-AH 20), from its homeport of Norfolk, Virginia. Both the Comfort and the Javits would later be modified to receive COVID patients at the request of New York Gov. Andrew Cuomo. Because of the tight timelines to get “bed spaces on the ground,” workers drove projects around the clock. 10

“Teamwork is essential to accomplishing any mission and that’s certainly been the case with respect to the ongoing COVID-19 response,” said Philadelphia District Commander Lt. Col. David Park. His team of professionals were responsible for multiple construction efforts in New Jersey. “It’s been a 24/7 effort to construct the alternate care facilities in New Jersey, and many have sacrificed to carry out this vital mission,” Park said. With three additional sites constructed throughout New York City, several sites built in New Jersey, and a handful of others under construction by the states, NAD helped turn out a dozen care sites in the region. Its final build, the Walter E. Washington Convention Center in Washington, D.C., was managed by its Baltimore District. “Our goal … [was] to get this site operational as quickly as possible while meeting medical standards, so equipment and beds can be placed and health care providers can take over, should the need arise,” said Col. John Litz, Baltimore District commander. While Washington, D.C., Mayor Muriel Bowser hoped never to have to use the site, “we must have the capacity to support a potential increase in COVID-19 patients,” she said. Because of the tireless efforts of the North Atlantic Division team, its partners, and contractors, more than 7,000 bed spaces were provided to states in a mix of COVID and non-COVID configurations. And though the number of USACE spaces provided would barely scratch the surface of the more than 17 million Americans who have been confirmed with the virus since March 2020, as of this writing, each space means everything to those treated inside it. “We want to set the condition that hospital bed space is not a factor [in our ability to overcome the disease],” Semonite said. Ann Marie Harvie, Sarah Lazo, Patrick Bloodgood, Steve Rochette, Chris Augsburger, Joe Macri, and the New York District Public Affairs Office contributed to this article. n