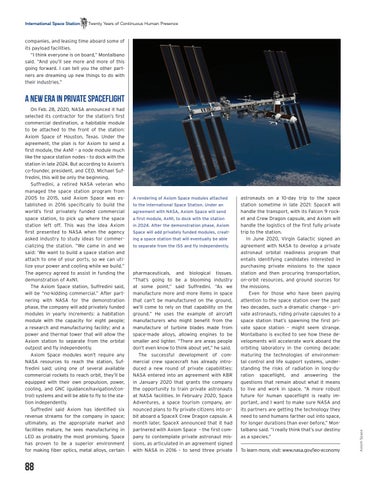 companies, and leasing time aboard some of its payload facilities. “I think everyone is on board,” Montalbano said. “And you’ll see more and more of this going forward. I can tell you the other partners are dreaming up new things to do with their industries.”

On Feb. 28, 2020, NASA announced it had selected its contractor for the station’s first commercial destination, a habitable module to be attached to the front of the station: Axiom Space of Houston, Texas. Under the agreement, the plan is for Axiom to send a first module, the AxN1 – a node module much like the space station nodes – to dock with the station in late 2024. But according to Axiom’s co-founder, president, and CEO, Michael Suffredini, this will be only the beginning. Suffredini, a retired NASA veteran who managed the space station program from 2005 to 2015, said Axiom Space was established in 2016 specifically to build the world’s first privately funded commercial space station, to pick up where the space station left off. This was the idea Axiom first presented to NASA when the agency asked industry to study ideas for commercializing the station. “We came in and we said: ‘We want to build a space station and attach to one of your ports, so we can utilize your power and cooling while we build.” The agency agreed to assist in funding the demonstration of AxN1. The Axiom Space station, Suffredini said, will be “no-kidding commercial.” After partnering with NASA for the demonstration phase, the company will add privately funded modules in yearly increments: a habitation module with the capacity for eight people; a research and manufacturing facility; and a power and thermal tower that will allow the Axiom station to separate from the orbital outpost and fly independently. Axiom Space modules won’t require any NASA resources to reach the station, Suffredini said; using one of several available commercial rockets to reach orbit, they’ll be equipped with their own propulsion, power, cooling, and GNC (guidance/navigation/control) systems and will be able to fly to the station independently. Suffredini said Axiom has identified six revenue streams for the company in space; ultimately, as the appropriate market and facilities mature, he sees manufacturing in LEO as probably the most promising. Space has proven to be a superior environment for making fiber optics, metal alloys, certain

A rendering of Axiom Space modules attached to the International Space Station. Under an agreement with NASA, Axiom Space will send a first module, AxN1, to dock with the station in 2024. After the demonstration phase, Axiom Space will add privately funded modules, creating a space station that will eventually be able to separate from the ISS and fly independently.

pharmaceuticals, and biological tissues. “That’s going to be a blooming industry at some point,” said Suffredini. “As we manufacture more and more items in space that can’t be manufactured on the ground, we’ll come to rely on that capability on the ground.” He uses the example of aircraft manufacturers who might benefit from the manufacture of turbine blades made from space-made alloys, allowing engines to be smaller and lighter. “There are areas people don’t even know to think about yet,” he said. The successful development of commercial crew spacecraft has already introduced a new round of private capabilities: NASA entered into an agreement with KBR in January 2020 that grants the company the opportunity to train private astronauts at NASA facilities. In February 2020, Space Adventures, a space tourism company, announced plans to fly private citizens into orbit aboard a SpaceX Crew Dragon capsule. A month later, SpaceX announced that it had partnered with Axiom Space – the first company to contemplate private astronaut missions, as articulated in an agreement signed with NASA in 2016 – to send three private

astronauts on a 10-day trip to the space station sometime in late 2021: SpaceX will handle the transport, with its Falcon 9 rocket and Crew Dragon capsule, and Axiom will handle the logistics of the first fully private trip to the station. In June 2020, Virgin Galactic signed an agreement with NASA to develop a private astronaut orbital readiness program that entails identifying candidates interested in purchasing private missions to the space station and then procuring transportation, on-orbit resources, and ground sources for the missions. Even for those who have been paying attention to the space station over the past two decades, such a dramatic change – private astronauts, riding private capsules to a space station that’s spawning the first private space station – might seem strange. Montalbano is excited to see how these developments will accelerate work aboard the orbiting laboratory in the coming decade: maturing the technologies of environmental control and life support systems, understanding the risks of radiation in long-duration spaceflight, and answering the questions that remain about what it means to live and work in space. “A more robust future for human spaceflight is really important, and I want to make sure NASA and its partners are getting the technology they need to send humans farther out into space, for longer durations than ever before,” Montalbano said. “I really think that’s our destiny as a species.” To learn more, visit: www.nasa.gov/leo-economy

A NEW ERA IN PRIVATE SPACEFLIGHT