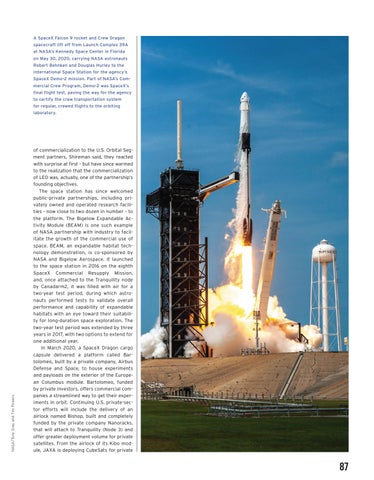 A SpaceX Falcon 9 rocket and Crew Dragon spacecraft lift off from Launch Complex 39A at NASA’s Kennedy Space Center in Florida on May 30, 2020, carrying NASA astronauts Robert Behnken and Douglas Hurley to the International Space Station for the agency’s SpaceX Demo-2 mission. Part of NASA’s Commercial Crew Program, Demo-2 was SpaceX’s final flight test, paving the way for the agency to certify the crew transportation system for regular, crewed flights to the orbiting

of commercialization to the U.S. Orbital Segment partners, Shireman said, they reacted with surprise at first – but have since warmed to the realization that the commercialization of LEO was, actually, one of the partnership’s founding objectives. The space station has since welcomed public-private partnerships, including privately owned and operated research facilities – now close to two dozen in number – to the platform. The Bigelow Expandable Activity Module (BEAM) is one such example of NASA partnership with industry to facilitate the growth of the commercial use of space. BEAM, an expandable habitat technology demonstration, is co-sponsored by NASA and Bigelow Aerospace. It launched to the space station in 2016 on the eighth SpaceX Commercial Resupply Mission, and, once attached to the Tranquility node by Canadarm2, it was filled with air for a two-year test period, during which astronauts performed tests to validate overall performance and capability of expandable habitats with an eye toward their suitability for long-duration space exploration. The two-year test period was extended by three years in 2017, with two options to extend for one additional year. In March 2020, a SpaceX Dragon cargo capsule delivered a platform called Bartolomeo, built by a private company, Airbus Defense and Space, to house experiments and payloads on the exterior of the European Columbus module. Bartolomeo, funded by private investors, offers commercial companies a streamlined way to get their experiments in orbit. Continuing U.S. private-sector efforts will include the delivery of an airlock named Bishop, built and completely funded by the private company Nanoracks, that will attach to Tranquility (Node 3) and offer greater deployment volume for private satellites. From the airlock of its Kibo module, JAXA is deploying CubeSats for private