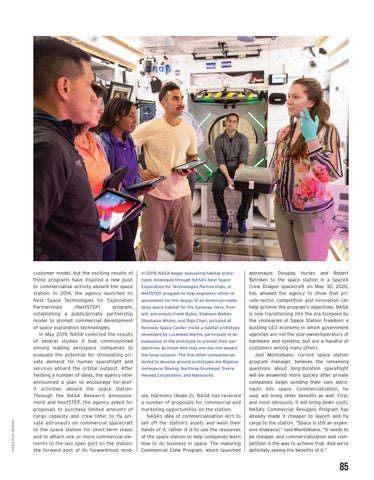 customer model, but the exciting results of those programs have inspired a new push to commercialize activity aboard the space station. In 2014, the agency launched its Next Space Technologies for Exploration Partnerships (NextSTEP) program, establishing a public/private partnership model to prompt commercial development of space exploration technologies. In May 2019, NASA collected the results of several studies it had commissioned among leading aerospace companies to evaluate the potential for stimulating private demand for human spaceflight and services aboard the orbital outpost. After fielding a number of ideas, the agency later announced a plan to encourage for-profit activities aboard the space station. Through the NASA Research Announcement and NextSTEP, the agency asked for proposals to purchase limited amounts of cargo capacity and crew time; to fly private astronauts on commercial spacecraft to the space station for short-term stays; and to attach one or more commercial elements to the last open port on the station: the forward port of its forwardmost mod-

In 2019, NASA began evaluating habitat prototypes developed through NASA’s Next Space Exploration for Technologies Partnerships, or NextSTEP, program to help engineers refine requirements for the design of an American-made deep space habitat for the Gateway. Here, from left, astronauts Frank Rubio, Shannon Walker, Stephanie Wilson, and Raja Chari, pictured at Kennedy Space Center inside a habitat prototype developed by Lockheed Martin, participate in an evaluation of the prototype to provide their perspectives as those who may one day live aboard the lunar outpost. The five other companies selected to develop ground prototypes are Bigelow Aerospace, Boeing, Northrop Grumman, Sierra Nevada Corporation, and Nanoracks.

ule, Harmony (Node 2). NASA has received a number of proposals for commercial and marketing opportunities on the station. NASA’s idea of commercialization isn’t to sell off the station’s assets and wash their hands of it; rather it is to use the resources of the space station to help companies learn how to do business in space. The maturing Commercial Crew Program, which launched

astronauts Douglas Hurley and Robert Behnken to the space station in a SpaceX Crew Dragon spacecraft on May 30, 2020, has allowed the agency to show that private-sector competition and innovation can help achieve the program’s objectives. NASA is now transitioning into the era foreseen by the visionaries of Space Station Freedom: a bustling LEO economy in which government agencies are not the sole owner/operators of hardware and systems, but are a handful of customers among many others. Joel Montalbano, current space station program manager, believes the remaining questions about long-duration spaceflight will be answered more quickly after private companies begin sending their own astronauts into space. Commercialization, he said, will bring other benefits as well. First, and most obviously, it will bring down costs. NASA’s Commercial Resupply Program has already made it cheaper to launch and fly cargo to the station. “Space is still an expensive endeavor,” said Montalbano. “It needs to be cheaper, and commercialization and competition is the way to achieve that. And we’re definitely seeing the benefits of it.”