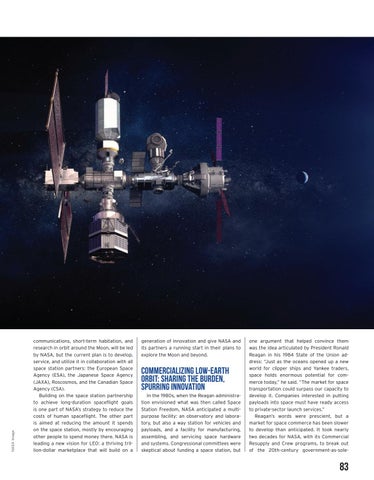 communications, short-term habitation, and research in orbit around the Moon, will be led by NASA, but the current plan is to develop, service, and utilize it in collaboration with all space station partners: the European Space Agency (ESA), the Japanese Space Agency (JAXA), Roscosmos, and the Canadian Space Agency (CSA). Building on the space station partnership to achieve long-duration spaceflight goals is one part of NASA’s strategy to reduce the costs of human spaceflight. The other part is aimed at reducing the amount it spends on the space station, mostly by encouraging other people to spend money there. NASA is leading a new vision for LEO: a thriving trillion-dollar marketplace that will build on a

generation of innovation and give NASA and its partners a running start in their plans to explore the Moon and beyond.

COMMERCIALIZING LOW-EARTH ORBIT: SHARING THE BURDEN, SPURRING INNOVATION In the 1980s, when the Reagan administration envisioned what was then called Space Station Freedom, NASA anticipated a multipurpose facility: an observatory and laboratory, but also a way station for vehicles and payloads, and a facility for manufacturing, assembling, and servicing space hardware and systems. Congressional committees were skeptical about funding a space station, but

one argument that helped convince them was the idea articulated by President Ronald Reagan in his 1984 State of the Union address: “Just as the oceans opened up a new world for clipper ships and Yankee traders, space holds enormous potential for commerce today,” he said. “The market for space transportation could surpass our capacity to develop it. Companies interested in putting payloads into space must have ready access to private-sector launch services.” Reagan’s words were prescient, but a market for space commerce has been slower to develop than anticipated. It took nearly two decades for NASA, with its Commercial Resupply and Crew programs, to break out of the 20th-century government-as-sole-