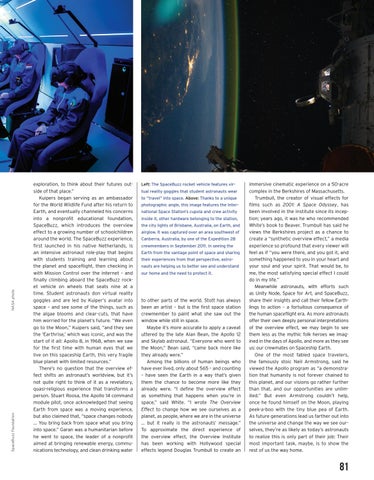 exploration, to think about their futures outside of that place.” Kuipers began serving as an ambassador for the World Wildlife Fund after his return to Earth, and eventually channeled his concerns into a nonprofit educational foundation, SpaceBuzz, which introduces the overview effect to a growing number of schoolchildren around the world. The SpaceBuzz experience, first launched in his native Netherlands, is an intensive astronaut role-play that begins with students training and learning about the planet and spaceflight, then checking in with Mission Control over the internet – and finally climbing aboard the SpaceBuzz rocket vehicle on wheels that seats nine at a time. Student astronauts don virtual reality goggles and are led by Kuiper’s avatar into space – and see some of the things, such as the algae blooms and clear-cuts, that have him worried for the planet’s future. “We even go to the Moon,” Kuipers said, “and they see the ‘Earthrise,’ which was iconic, and was the start of it all: Apollo 8, in 1968, when we saw for the first time with human eyes that we live on this spaceship Earth, this very fragile blue planet with limited resources.” There’s no question that the overview effect shifts an astronaut’s worldview, but it’s not quite right to think of it as a revelatory, quasi-religious experience that transforms a person. Stuart Roosa, the Apollo 14 command module pilot, once acknowledged that seeing Earth from space was a moving experience, but also claimed that, “space changes nobody ... You bring back from space what you bring into space.” Garan was a humanitarian before he went to space, the leader of a nonprofit aimed at bringing renewable energy, communications technology, and clean drinking water

Left: The SpaceBuzz rocket vehicle features virtual reality goggles that student astronauts wear to “travel” into space. Above: Thanks to a unique photographic angle, this image features the International Space Station’s cupola and crew activity inside it, other hardware belonging to the station, the city lights of Brisbane, Australia, on Earth, and airglow. It was captured over an area southwest of Canberra, Australia, by one of the Expedition 28 crewmembers in September 2011. In seeing the Earth from the vantage point of space and sharing their experiences from that perspective, astronauts are helping us to better see and understand our home and the need to protect it.

to other parts of the world. Stott has always been an artist – but is the first space station crewmember to paint what she saw out the window while still in space. Maybe it’s more accurate to apply a caveat uttered by the late Alan Bean, the Apollo 12 and Skylab astronaut. “Everyone who went to the Moon,” Bean said, “came back more like they already were.” Among the billions of human beings who have ever lived, only about 565 – and counting – have seen the Earth in a way that’s given them the chance to become more like they already were. “I define the overview effect as something that happens when you’re in space,” said White. “I wrote The Overview Effect to change how we see ourselves as a planet, as people, where we are in the universe ... but it really is the astronauts’ message.” To approximate the direct experience of the overview effect, the Overview Institute has been working with Hollywood special effects legend Douglas Trumbull to create an

immersive cinematic experience on a 50-acre complex in the Berkshires of Massachusetts. Trumbull, the creator of visual effects for films such as 2001: A Space Odyssey, has been involved in the institute since its inception; years ago, it was he who recommended White’s book to Beaver. Trumbull has said he views the Berkshires project as a chance to create a “synthetic overview effect,” a media experience so profound that every viewer will feel as if “you were there, and you got it, and something happened to you in your heart and your soul and your spirit. That would be, to me, the most satisfying special effect I could do in my life.” Meanwhile astronauts, with efforts such as Unity Node, Space for Art, and SpaceBuzz, share their insights and call their fellow Earthlings to action – a fortuitous consequence of the human spaceflight era. As more astronauts offer their own deeply personal interpretations of the overview effect, we may begin to see them less as the mythic folk heroes we imagined in the days of Apollo, and more as they see us: our crewmates on Spaceship Earth. One of the most fabled space travelers, the famously stoic Neil Armstrong, said he viewed the Apollo program as “a demonstration that humanity is not forever chained to this planet, and our visions go rather further than that, and our opportunities are unlimited.” But even Armstrong couldn’t help, once he found himself on the Moon, playing peek-a-boo with the tiny blue pea of Earth. As future generations lead us farther out into the universe and change the way we see ourselves, they’re as likely as today’s astronauts to realize this is only part of their job: Their most important task, maybe, is to show the rest of us the way home.