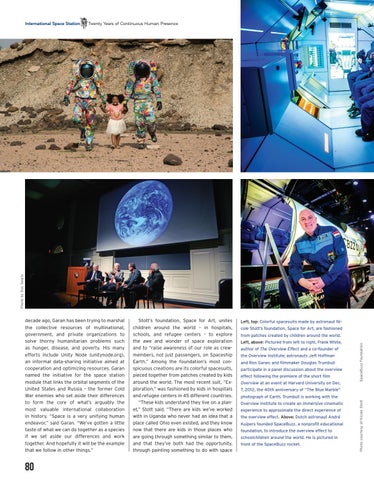 Left, top: Colorful spacesuits made by astronaut Nicole Stott’s foundation, Space for Art, are fashioned from patches created by children around the world. Left, above: Pictured from left to right, Frank White, author of The Overview Effect and a co-founder of the Overview Institute; astronauts Jeff Hoffman and Ron Garan; and filmmaker Douglas Trumbull participate in a panel discussion about the overview effect following the premiere of the short film Overview at an event at Harvard University on Dec.

Stott’s foundation, Space for Art, unites children around the world – in hospitals, schools, and refugee centers – to explore the awe and wonder of space exploration and to “raise awareness of our role as crewmembers, not just passengers, on Spaceship Earth.” Among the foundation’s most conspicuous creations are its colorful spacesuits, pieced together from patches created by kids around the world. The most recent suit, “Exploration,” was fashioned by kids in hospitals and refugee centers in 45 different countries. “These kids understand they live on a planet,” Stott said. “There are kids we’ve worked with in Uganda who never had an idea that a place called Ohio even existed, and they know now that there are kids in those places who are going through something similar to them, and that they’ve both had the opportunity, through painting something to do with space

7, 2012, the 40th anniversary of “The Blue Marble” photograph of Earth. Trumbull is working with the Overview Institute to create an immersive cinematic experience to approximate the direct experience of the overview effect. Above: Dutch astronaut André Kuipers founded SpaceBuzz, a nonprofit educational foundation, to introduce the overview effect to schoolchildren around the world. He is pictured in front of the SpaceBuzz rocket.

decade ago, Garan has been trying to marshal the collective resources of multinational, government, and private organizations to solve thorny humanitarian problems such as hunger, disease, and poverty. His many efforts include Unity Node (unitynode.org), an informal data-sharing initiative aimed at cooperation and optimizing resources. Garan named the initiative for the space station module that links the orbital segments of the United States and Russia – the former Cold War enemies who set aside their differences to form the core of what’s arguably the most valuable international collaboration in history. “Space is a very unifying human endeavor,” said Garan. “We’ve gotten a little taste of what we can do together as a species if we set aside our differences and work together. And hopefully it will be the example that we follow in other things.”